A Linux file system is a structured collection of files on a disk drive or a partition. A partition is a segment of memory and contains some specific data. In our machine, there can be various partitions of the memory. Generally, every partition contains a file system.

The general-purpose computer system needs to store data systematically so that we can easily access the files in less time. It stores the data on hard disks (HDD) or some equivalent storage type. There may be below reasons for maintaining the file system:

What is the Linux File System?

Linux file system is generally a built-in layer of a Linux operating system used to handle the data management of the storage. It helps to arrange the file on the disk storage. It manages the file name, file size, creation date, and much more information about a file.

If we have an unsupported file format in our file system, we can download software to deal with it.

A file system is designed in a way so that it can manage and provide space for non-volatile storage data. All file systems required a namespace that is a naming and organizational methodology. The namespace defines the naming process, length of the file name, or a subset of characters that can be used for the file name. It also defines the logical structure of files on a memory segment, such as the use of directories for organizing the specific files. Once a namespace is described, a Metadata description must be defined for that particular file.

The data structure needs to support a hierarchical directory structure; this structure is used to describe the available and used disk space for a particular block. It also has the other details about the files such as file size, date & time of creation, update, and last modified.

Also, it stores advanced information about the section of the disk, such as partitions and volumes.

The advanced data and the structures that it represents contain the information about the file system stored on the drive; it is distinct and independent of the file system metadata. 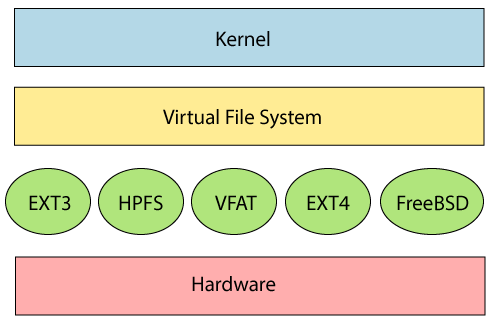 The file system requires an API (Application programming interface) to access the function calls to interact with file system components like files and directories. API facilitates tasks such as creating, deleting, and copying the files. It facilitates an algorithm that defines the arrangement of files on a file system.

In Linux, the file system creates a tree structure. All the files are arranged as a tree and its branches. The topmost directory called the root (/) directory. All other directories in Linux can be accessed from the root directory.

Some key features of Linux file system are as following: 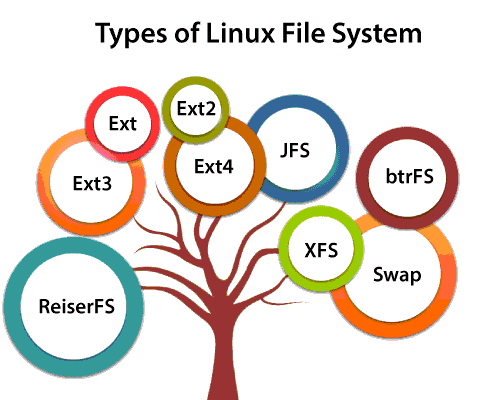 The file system Ext stands for Extended File System. It was primarily developed for MINIX OS. The Ext file system is an older version, and is no longer used due to some limitations.

Ext2 is the first Linux file system that allows managing two terabytes of data. Ext3 is developed through Ext2; it is an upgraded version of Ext2 and contains backward compatibility. The major drawback of Ext3 is that it does not support servers because this file system does not support file recovery and disk snapshot.

Ext4 file system is the faster file system among all the Ext file systems. It is a very compatible option for the SSD (solid-state drive) disks, and it is the default file system in Linux distribution.

JFS stands for Journaled File System, and it is developed by IBM for AIX Unix. It is an alternative to the Ext file system. It can also be used in place of Ext4, where stability is needed with few resources. It is a handy file system when CPU power is limited.

ReiserFS is an alternative to the Ext3 file system. It has improved performance and advanced features. In the earlier time, the ReiserFS was used as the default file system in SUSE Linux, but later it has changed some policies, so SUSE returned to Ext3. This file system dynamically supports the file extension, but it has some drawbacks in performance.

Btrfs stands for the B tree file system. It is used for fault tolerance, repair system, fun administration, extensive storage configuration, and more. It is not a good suit for the production system.

The swap file system is used for memory paging in Linux operating system during the system hibernation. A system that never goes in hibernate state is required to have swap space equal to its RAM size.