Home » Tech Tips » What is Difference Between CloudFormation and Terraform?

AWS CloudFormation is a managed AWS service with a common language for you to model and provision AWS and third-party application resources for your cloud environment in a secure and repeatable manner. This provides a single reference point for both AWS infrastructure mapping and development.

CloudFormation abstracts away many of the subtleties involved in managing dependencies between AWS resources. Additionally, CloudFormation allows for the modification and destruction of provisioned resources in a prescribed and predictable manner, making versioning and iterating on your infrastructure much more accessible. CloudFormation is AWS-focused and AWS-native.

With CloudFormation, you don’t need to figure out which AWS services need to be provisioned or the subtleties of how to make these dependencies connect together  — CloudFormation takes care of this for you in a siloed kind of manner. Once deployed, you can destroy and modify AWS resources in a controlled and predictable way within CloudFormation, allowing you to version control your own AWS infrastructure. This allows for iterative testing, as well as rollback (when configured properly). 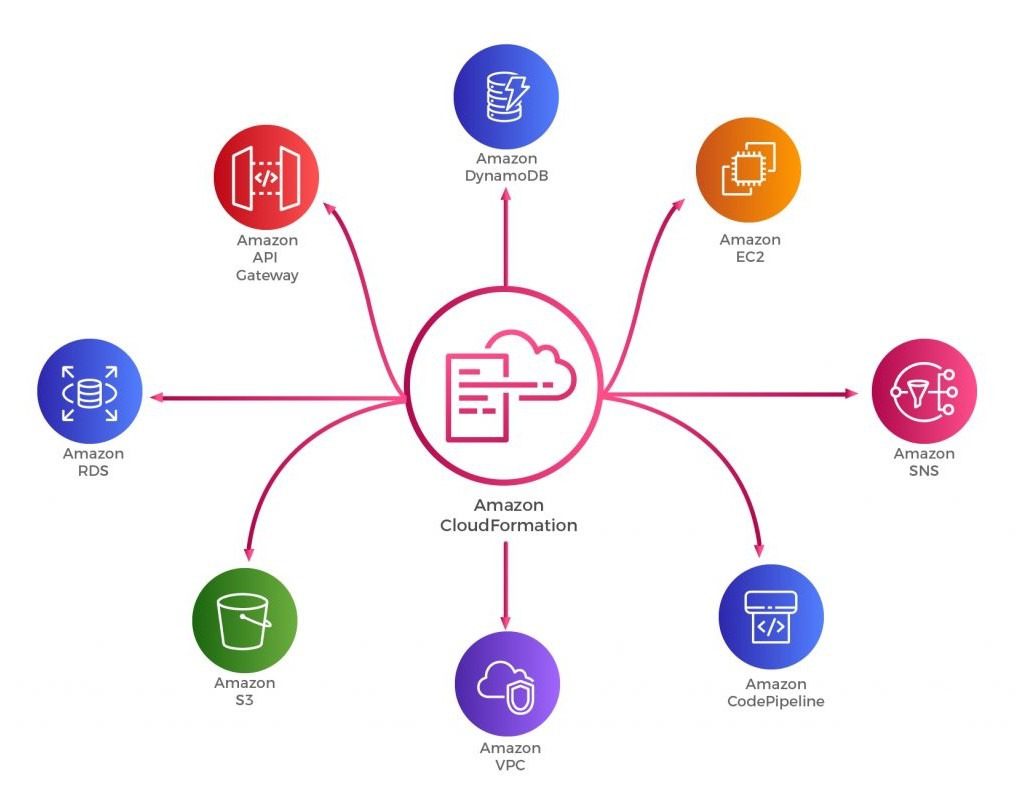 Created by HashiCorp, Terraform is an open-source infrastructure-as-code software tool that helps users with the task of setting up and provisioning data center infrastructure. A cloud-agnostic tool, Terraform codifies APIs into declarative configuration files that can be shared amongst team members, treated as code, edited, reviewed, and versioned. It is a powerful tool that helps the employees work in IT operations, provision, upgrade, and maintain infrastructure. Terraform has its domain-specific language called Hashicorp Configuration Language (HCL). This is a fully JSON-compatible language that helps the DevOps professionals to define the infrastructure-as-a-code.

CloudFormation covers most parts of AWS and needs some time to support new service capabilities. Terraform covers most AWS resources as well and is often faster than CloudFormation when it comes to supporting new AWS features. On top of that, Terraform supports other cloud providers as well as 3rd party services. A shortened list of vendors supported by Terraform: Google Cloud Platform, Azure, GitHub, GitLab, Datadog, many more. 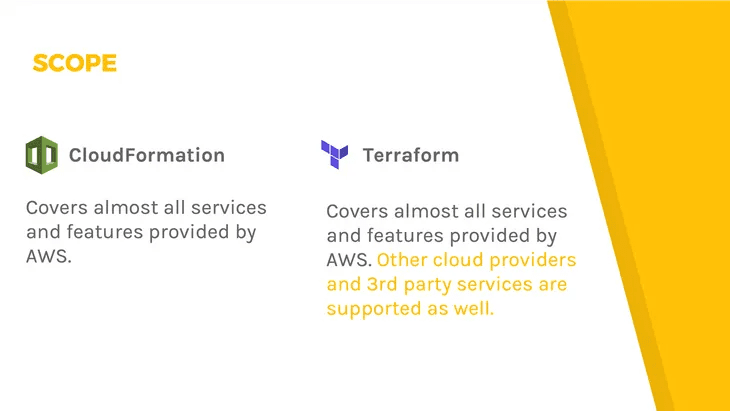 If you are looking to provision services on multiple cloud platforms, Terraform is your go-to option. While Terraform supports all cloud vendors like AWS, GCP, Azure, and many others, CloudFormation is confined only to AWS. So, in case your environment involves multiple cloud deployments, Cloudformation is not for you. Suppose you are using AWS resources like EC2, S3, etc., you are best advised to stick to Cloudformation.

Terraform uses HashiCorp Configuration Language (HCL), a language built by HashiCorp. It is fully compatible with JSON and was created to strike a balance between human-friendly and machine-friendly languages while remaining interpretable to humans.

AWS CloudFormation utilizes either JSON or YAML, with the YAML version being slightly easier to read (as well as more compact). CloudFormation also has a limit of 51,000 bytes for the template body itself. If a larger template is needed, AWS advises developers to separate resources into nested stacks.

With both CloudFormation and Terraform, you need to keep track of all resources under management.

With CloudFormation, users can perform regular drift detection on their entire provisioned infrastructure, and receive detailed responses if anything has changed. Some resources in a CloudFormation stack are able to have parameters changed without destroying and rebuilding the targeted resource, while others are considered immutable and will be rebuilt.  Additionally, before CloudFormation will delete a resource, it will determine dependencies and fail the command if any exist (which would remain after resource removal).

Terraform stores the state of the infrastructure on the provisioning computer, or in a remote site (for team use). This state file is a custom JSON format that serves as a map for Terraform, describing which resources it manages, and how those resources should be configured.

Since CloudFormation is a managed AWS service, it does this for you. CloudFormation will consistently check the infrastructure it has provisioned to detect if it is maintaining that state and configuration.  If you’re using Terraform, it stores its state on a local disk, and there is a remote state option, which writes the state data to a remote data store, to be shared between all members of a team. The remote state supports Amazon S3, but you need to configure it yourself.

CloudFormation and Terraform differ in how they handle configuration and parameters.

In the constantly changing world of infrastructure requirements,  flexibility is key. CloudFormation and Terraform have unique ways of addressing this need.

Terraform has modules, which are containers for multiple resources that are used together. Modules allow developers to abstract their infrastructure into reusable, shareable code and increases iteration speed for teams (much like functions do in a programming language like Ruby).

A benefit of Terraform is increased flexibility over CloudFormation with regards to modularity. Terraform modules can be pulled in for any provider supported, or organizations can roll their own.

Conversely, in a multi-cloud or hybrid environment, CloudFormation doesn’t easily allow users to provision or natively coordinate non-AWS resources. It’s not impossible, as there is a custom resource feature in CloudFormation, but it requires additional templating and design to bring in third-party resources, or those AWS services not available organically.

While CloudFormation is confined to the services offered by AWS, Terraform spans across multiple Cloud Service Providers like AWS, Azure, Google Cloud Platform, and many more, Terraform covers most of the AWS resources.

The best part about both these tools is that both are free of cost. Both of these tools have large communities with a lot of support and examples. Cloudformation has no price. The only fee that users incur is the cost of AWS service provisioned by CloudFormation. Terraform is a free and open-source tool. Terraform however offers a paid enterprise version that has additional collaboration and governance options.

How to use Terraform?

Let’s look at an example where we will see how we can provision EC2 instances using Terraform on AWS. Now, let’s see the configuration part.

1. AWS account
2. Terraform CLI
3. AWS credential configured locally. The credentials can be stored in a file, and the path can be specified on the provider.

How to use CloudFormation Templates?

The first and foremost pre-requisite for using CloudFormation is that you need a template that specifies the resources you want in your stack.

Below is an example of a CloudFormation template to provision an EC2 instance:

1 thought on “What is Difference Between CloudFormation and Terraform?”