Google CEO Sundar Pichai announced the news in an email to staff, saying the company needed to focus on key priorities — like artificial intelligence.

Google is cutting approximately 12,000 jobs — the latest technology firm to initiate significant layoffs as inflation rises and global markets brace for a downturn.

Google SEO Sundar Pichai announced the cuts in an email to staff on Friday and in a blog post. The job losses constitute around 6 percent of Google’s global workforce, compared to recent layoffs at Microsoft (10,000 jobs or 5 percent of the workforce), Amazon (18,000 jobs / 6 percent), and Meta (11,000 / 13 percent). Earlier this month, Google’s parent company Alphabet announced much smaller cuts at Verily, its health-focused subsidiary, and Intrinsic, a subsidiary developing software for industrial robots.

In his blog post, Pichai said the layoffs marked a moment to for the company to “sharpen our focus, re-engineer our cost base, and direct our talent and capital to our highest priorities.” The CEO noted that artificial intelligence would be a key area going forward.

“I am confident about the huge opportunity in front of us thanks to the strength of our mission, the value of our products and services, and our early investments in AI,” said Pichai. “To fully capture it, we’ll need to make tough choices.”

Sundar Pichai also sends the below email to employees. 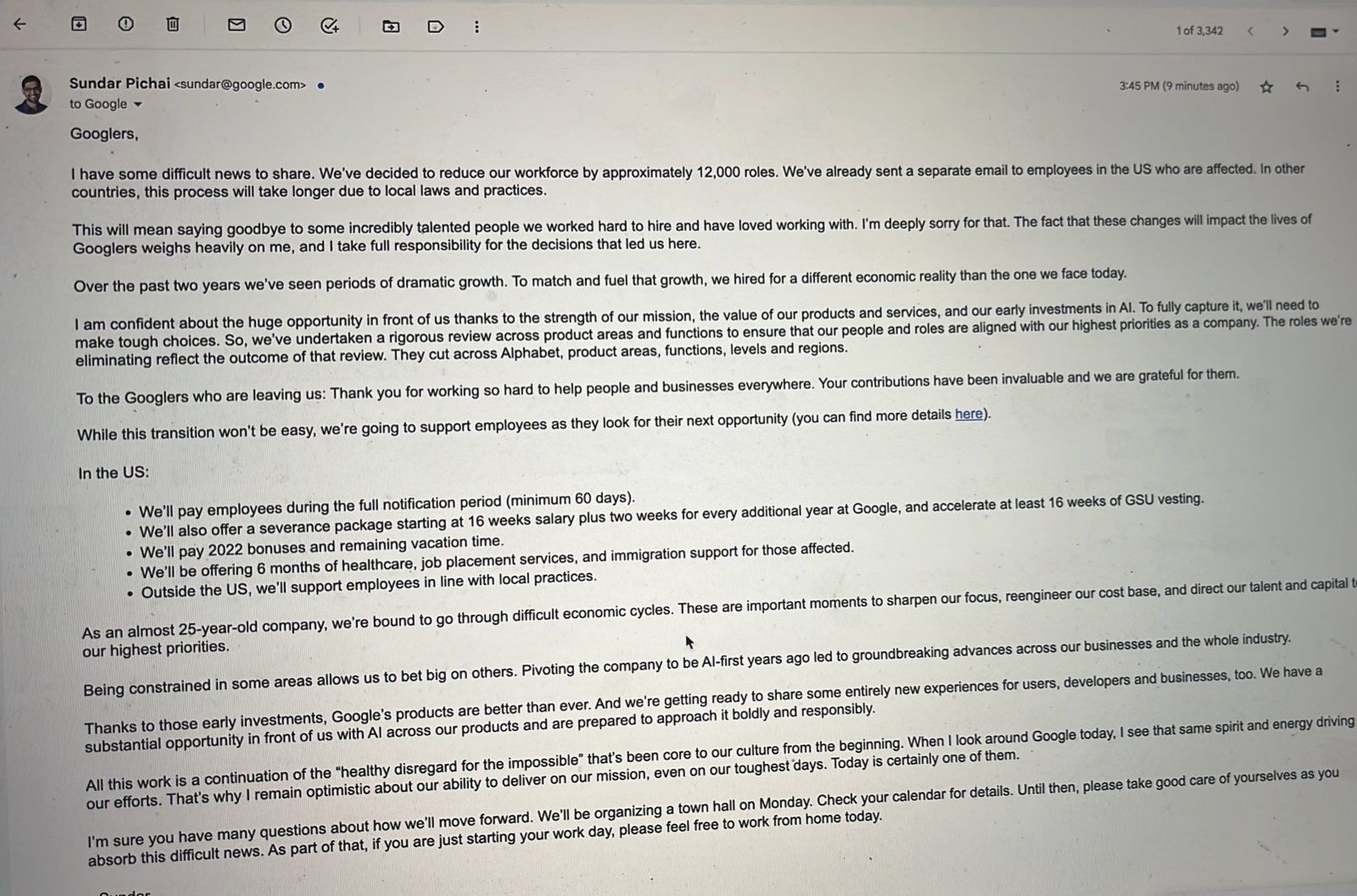 Although Google made significant early leads in AI with investments like its 2014 acquisition of research-focused AI lab DeepMind, the the company has been wrong-footed in recent months by more daring rivals like OpenAI, which launched its buzzy AI chatbot ChatGPT on the web last year. OpenAI has forged a deep partnership with Google rival Microsoft, with the latter promising to integrate its AI tech into products like search and office software.

In Google’s earnings report last October it announced revenue of $69 billion and profit of $13.9 billion; marking growing revenue (up from $65.1 billion the previous year) but shrinking profits (down from $18.9 billion the same quarter in 2021). Earlier last year, Pichai signaled that the company would be slowing down on hiring, saying Googlers would have to work with “greater urgency, sharper focus, and more hunger than we’ve shown on sunnier days.”

Related:  Google is Bringing its Own VPN to Desktops And Phones