16.1 Sleeping pills are recommended by doctors to the patients suffering from sleeplessness but it is not advisable to take its doses without consultation with the doctor. Why?
Ans. Most of drugs taken in doses higher than recommended may produce harmful effects and act as poison and cause even death. Therefore, a doctor must always be consulted before taking the drug.

16.2 With refrence to which classification has the statement “ranitidine is an antacid”, been given?
Ans. This statement refers to the classification of drugs according to pharmacological effect because any drug which will be used to neutralise the excess acid present in the stomach will be called an antacid. 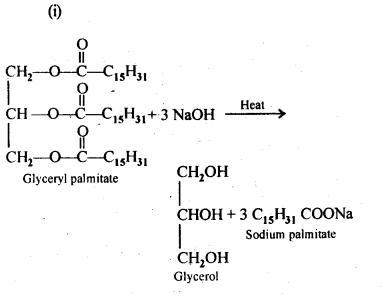 16.2 Explain the term, target molecules or drug targets as used in medicinal chemistry.
Ans. Drugs interact with macromolecules like proteins, carbohydrates, lipids and nucleic acids thus these macro molecules are called drug targets. These macromolecules perform various functions in the body for example, proteins perform several roles in the body. Proteins which act as biological catalysts are called enzymes, those which are involved in communication system are called receptors. Carrier proteins carry polar molecules across the cell membrane. Nucleic acids have coded genetic information in the cell whereas lipids and carbohydrates form structural part of cell membranes.

16.4 Why should not medicines be taken without consulting doctors?
Ans. Some drugs can cause side effects when drug binds to more than one type of receptor. Therefore, doctor’s consultation is must to choose the right drug that has the maximum affinity for a particular receptor site to have desired effect. Dose of the drug taken at a time is also crucial because some drugs in higher doses act as poisons and may cause death.

16.5 Define the term chemotherapy.
Ans. It is the branch of chemistry that deals with the treatment of diseases by using chemicals as medicines.

16.7 While antacids and antiallergic drugs interfere with the function of histamines, why do these not interfere with the function of each other?
Ans. Drugs are designed to cure some ailment in one organ of the body do not affect the other because they work on different receptors. For example, secretion of histamine causes allergy. It also causes acidity due to release of hydrochloric acid in the stomach. Since antiallergic and antacids drugs work on different receptors, therefore, antihistamines remove allergy while antacids remove acidity.

16.10 How do antiseptics differ from disinfectants? Give one example of each.
Ans. Antiseptics are chemical substances which prevent the growth of micro-organisms and may even kill them but they are not harmful for human or animal tissues. For example, dettol and savlon. They are generally applied on wounds, cuts, ulcers and diseased skin surfaces. Furacin and soframycin are well known antiseptic creams.
Disinfectants are chemical substances which kill microorganisms but are not safe to be applied to the living tissues. These are generally used to kill microorganisms present in the drains toilets, floors, etc. Some common examples of disinfectants are phenol ( 1% solution) and chlorine (0.2 to 0.4 ppm).

16.11 Why are cimetidine and ranitidine better antacids than sodium hydrogencarbonate or magnesium or aluminium hydroxide?
Ans. If excess of NaHCO3 or Mg(OH)2 or Al(OH)3 is used, it makes the stomach alkaline and thus triggers the release of even more HCl which may cause ulcer in the stomach. In contrast, cimetidine and ranitidine prevent the interaction of histamine with the receptor cells in the stomach wall and thus release of HCl will be less as histamine stimulates the secretion of acid.

16.13 What are the main constituents of dettol?
Ans. Chloroxylenol .and α-terpineol in a suitable solvent.

16.15 What are food preservatives?
Ans. Chemical substances which are used to protect food against bacteria, yeasts and moulds are called preservatives. For example, sodium benzoate and sodium metabisulphite.

16.17 What are artificial sweetening agents? Give two examples.
Ans. Artificial sweeteners are chemical substances which are sweet in taste but do not add any calories to our body. They are excreted as such through urine. For example, saccharin, aspartame, alitame etc.

16.20 How are synthetic detergents better than soaps?
Ans. They can be used in hard water as well as in acidic solution. The reason being that sulphonic acids and their calcium and magnesium salts are soluble in water thus they do not form curdy white precipitate with hard water but the fatty acids and their calcium and magnesium salts of soaps are insoluble. Detergents also works in slightly acidic solution due to formation of soluble alkyl hydrogen sulphates. Soaps react with acidic solution to form insoluble fatty acids.

16.25 Explain the cleansing action of soaps.
Ans. Cleansing action of soaps : Soaps contain two parts, a large hydrocarbon which is a hydrophobic (water repelling) and a negative charged head, which is hydrophillic (water attracting). In solution water molecules being polar in nature, surround the ions & not the organic part of the molecule. When a soap is dissolved in water the molecules gather together as clusters, called micelles. The tails stick inwards & the head outwards. The hydrocarbon tail attaches itself to oily dirt. When water is agitated, the oily dirt tends to lift off from the dirty surface & dissociates into fragments. The solution now contains small globules of oil surrounded detergent molecules. The negatively charged heads present in water prevent the small globules from coming together and form aggregates. Thus the oily dirt is removed from the object. 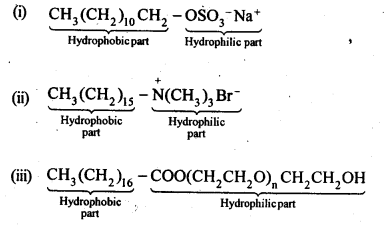