Since the temperature remains constant, the final pressure (p2) can be calculated using Boyle’s law.

According to Boyle’s law,

A vessel of 120 mL capacity contains a certain amount of gas at 35 °C and 1.2 bar pressure. The gas is transferred to another vessel of volume 180 mL at 35 °C. What would be its pressure?

Since the temperature remains constant, the final pressure (p2) can be calculated using Boyle’s law.

According to Boyle’s law,

Therefore, the pressure would be 0.8 bar.

Using the equation of state pV = nRT; show that at a given temperature density of a gas is proportional to gas pressurep.

The equation of state is given by,

n→ Number of moles of gas

From equation (i) we have,

Thus, from equation (ii), we have

Molar mass (M) of a gas is always constant and therefore, at constant temperature

Hence, at a given temperature, the density (d) of gas is proportional to its pressure (p)

At 0°C, the density of a certain oxide of a gas at 2 bar is same as that of dinitrogen at 5 bar. What is the molecular mass of the oxide?

Density (d) of the substance at temperature (T) can be given by the expression,

Where, M1 and p1 are the mass and pressure of the oxide respectively.

Density of dinitrogen gas (d2) is given by,

Where, M2 and p2 are the mass and pressure of the oxide respectively.

According to the given question,

Hence, the molecular mass of the oxide is 70 g/mol.

Pressure of 1 g of an ideal gas A at 27 °C is found to be 2 bar. When 2 g of another ideal gas B is introduced in the same flask at same temperature the pressure becomes 3 bar. Find a relationship between their molecular masses.

For ideal gas A, the ideal gas equation is given by,

Where, pA and nA represent the pressure and number of moles of gas A.

For ideal gas B, the ideal gas equation is given by,

Where, pB and nB represent the pressure and number of moles of gas B.

[V and T are constants for gases A and B]

From equation (i), we have

From equation (ii), we have

Where, MA and MB are the molecular masses of gases A and B respectively.

(Since total pressure is 3 bar)

Substituting these values in equation (v), we have

Thus, a relationship between the molecular masses of A and B is given by

The drain cleaner, Drainex contains small bits of aluminum which react with caustic soda to produce dihydrogen. What volume of dihydrogen at 20 °C and one bar will be released when 0.15g of aluminum reacts?

The reaction of aluminium with caustic soda can be represented as:

Let the volume of dihydrogen be

Therefore, 203 mL of dihydrogen will be released.

Total pressure exerted by the mixture can be obtained as:

Let the partial pressure of H2 in the vessel be

Now, let the partial pressure of O2 in the vessel be

Total pressure of the gas mixture in the vessel can be obtained as:

Hence, the total pressure of the gaseous mixture in the vessel is

The density (d2) of the gas at STP can be calculated using the equation,

The number of moles (n) can be calculated using the ideal gas equation as:

A student forgot to add the reaction mixture to the round bottomed flask at 27 °C but instead he/she placed the flask on the flame. After a lapse of time, he realized his mistake, and using a pyrometer he found the temperature of the flask was 477 °C. What fraction of air would have been expelled out?

Let the volume of the round bottomed flask be V.

According to Charles’s law,

Hence, fraction of air expelled out

The temperature (T) can be calculated using the ideal gas equation as:

Hence, the required temperature is 50 K.

Calculate the total number of electrons present in 1.4 g of dinitrogen gas.

How much time would it take to distribute one Avogadro number of wheat grains, if 1010 grains are distributed each second?

Hence, the time taken would be

Thus, number of moles of

Thus, number of moles of

Total pressure (p) can be calculated as:

Volume of the balloon

Now, mass of helium (m) inside the balloon is given by,

Volume (V) occupied by dihydrogen is given by,

According to the question,

Then, the number of moles of dihydrogen,

and the number of moles of dioxygen,

Then, partial pressure of dihydrogen,

Hence, the partial pressure of dihydrogen is

What would be the SI unit for the quantity pV2T 2/n?

The SI unit for temperature, T is K.

The SI unit for the number of moles, n is mol.

Therefore, the SI unit for quantity

In terms of Charles’ law explain why –273°C is the lowest possible temperature.

Charles’ law states that at constant pressure, the volume of a fixed mass of gas is directly proportional to its absolute temperature. 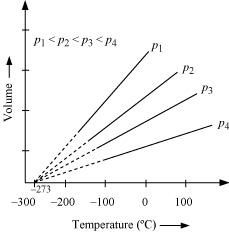 It was found that for all gases (at any given pressure), the plots of volume vs. temperature (in °C) is a straight line. If this line is extended to zero volume, then it intersects the temperature-axis at – 273°C. In other words, the volume of any gas at –273°C is zero. This is because all gases get liquefied before reaching a temperature of – 273°C. Hence, it can be concluded that – 273°C is the lowest possible temperature.

Critical temperature for carbon dioxide and methane are 31.1 °C and –81.9 °C respectively. Which of these has stronger intermolecular forces and why?

Physical significance of ‘a’:

‘a’ is a measure of the magnitude of intermolecular attractive forces within a gas.

Physical significance of ‘b’:

‘b’ is a measure of the volume of a gas molecule.