Question 4. Give the TUPAC names of the following compounds:

Question 7. Give condensed and bond line structural formulas and identify the functional group(s) present, if any, for: (a) 2, 2, 4-Trimethylpentane (b) 2-Hydroxy-l, 2, 3-propanetricarboxylic acid (c) Hexanedial.
Answer:

Question 8. Identify the functional groups in the following compounds: 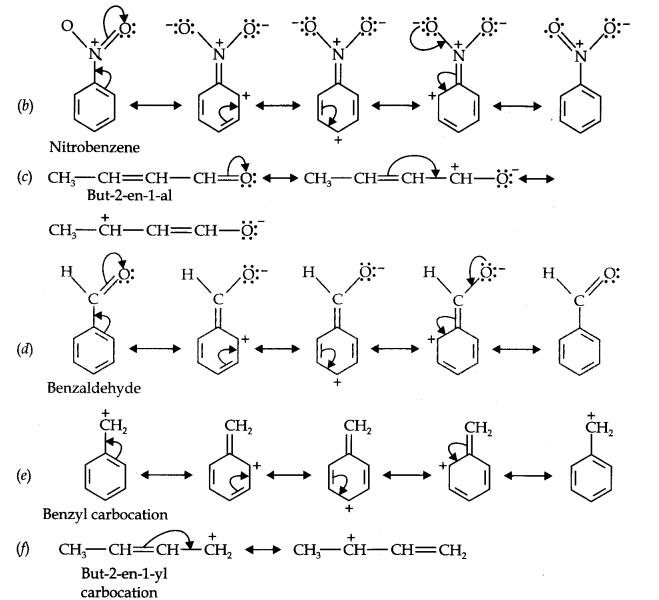 Question 15. What is the relationship between the members of following pairs of structures? Are they structural or geometrical isomers or resonance contributors?

Answer: (a) Structural isomers (actually position isomers as well as metamers)
(b) geometrical isomers
(c) resonance contributors because they differ in the position of electrons but not atoms

Question 16. For the following bond cleavages, use curved-arrows to show the electron flow and classify each as homolysis or heterolysis. Identify reactive intermediate produced as free radical, carbocation and carbanion. 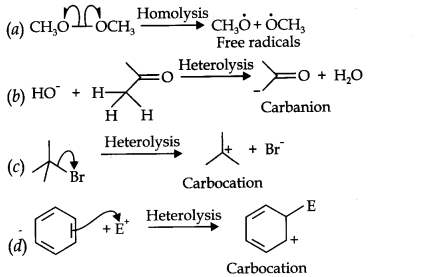 The atom A has lost its share in the electron pair and B has gained this share.
As a result A acquires a positive charge and B a negative charge. It is a temporary effect and takes place only in the presence of a reagent.
(a) -I-effect as shown below:
As the number of halogen atoms decreases, the overall -I- effect decreases and the acid strength decreases accordingly.

(b) +I-effect as shown below:
As the number of alkyl groups increases, the +I-effect increases and the acid strength
decreases accordingly.

Question 18. Give a brief description of the principles of the following techniques taking an example in each case: (a) Crystallisation (b) Distillation (c) Chromatography
Answer: (a) Crystallisation: In this process the impure solid is dissolved in the minimum volume of a suitable solvent. The soluble impurities pass into the solution while the insoluble ones left behind. The hot solution is then filtered and allowed to cool undisturbed till crystallisation is complete. The crystals are then separated from the mother liquor by filtraration and dried.
Example: crystallisation of sugar.
(b) Distillation: The operation of distillation is employed for the purification of liquids from non-volatile impurities. The impure liquid is boiled in a flask and the vapours so formed are collected and condensed to give back pure liquid in another vessel. Simple organic liquids such as benzene toluene, xylene etc. can be purified.
(c) Chromatography: Chromatography is based on the principle of selective distribution of the components of a mixture between two phases, a stationary phase and a moving phase. The stationary phase can be a solid or liquid, while the moving phase is a liquid or a gas. When the stationary phase is solid the basis is adsorption and when it is a liquid the basis is partition. Chromatography is generally used for the Reparation of coloured substances such as plant pigments or dyestuffs.

Question 19. Describe the method, which can be used to separate two compounds with different solubilities in a solvent S.
Answer: Fractional crystallisation is used for this purpose. A hot saturated solution of these two compounds is allowed to cool, the less soluble compound crystallises out while the more soluble remains in the solution. The crystals are separated from the mother liquor and the mother liquor is again concentrated and the hot solution again allowed to cool when the crystals of the second compound are obtained. These are again filtered and dried.

Cyanide, sulphide or halide of sodium are extracted from the fused mass by boiling it with distilled water. This extract is known as sodium fusion extract.

Question 23. Discuss the principle of estimation of halogens, sulphur and phosphorus present in an organic compound.
Answer:  Estimation of halogens: It involves oxidising the organic substance with fuming nitric acid in the presence of silver nitrate. The halogen of the substance is thus converted to silver halide which is separated and weighed:
1Weight of organic compound = W gm
weight of silver halide = x g.

Estimation of sulphur: The organic substance is heated with fuming nitric acid but no silver nitrate is added. The sulphur of the substance is oxidised to sulphuric acid which is then precipitated as barium sulphate by adding excess of barium chloride solution. From the weight of BaSO4 so obtained the percentage of sulphur can be calculated.

Estimation of phosphorous: The organic substance is heated with fuming nitric acid whereupon phosphorous is oxidised to phosphoric acid. The phosphoric acid is precipitated as ammonium phosphomolybdate, (NH4)3 PO4 .12MOO3, by the addition of ammonia and ammonium molybdate solution which is then separated, dried and weighed.

Question 24. Explain the principle of paper chromatography.
Answer: This is the simplest form of chromatography. Here a strip of paper acts as an adsorbent. It is based on the principle which is partly adsorption. The paper is made of cellulose fibres with molecules of water adsorbed on them. This acts as stationary phase. The mobile phase is the mixture of the components to be identified prepared in a suitable solvent.

Question 26. Explain the reason for the fusion of an organic compound with metallic sodium for testing nitrogen, sulphur and halogens.
Answer: Organic compound is fused with sodium metal so as to convert organic compounds into NaCN, Na2S, NaX and Na3PO4. Since these are ionic compounds and become more reactive and thus can be easily tested by suitable reagents.

Question 27. Name a suitable technique of separation of the components from a mixture of calcium sulphate and camphor.
Answer: Sublimation.Because camphor can sublime whereas CaSO4 does not.

Question 28. Explain, why an organic liquid vaporises at a temperature below its boiling point in its steam distillation ?
Answer: It is because in steam distillation the sum of vapour pressure of organic compound and steam should be equal to atmospheric pressure.

Question 29.Will CCl4 give white precipitate of AgCl on heating it with silver nitrate? Give reason for your answer.
Answer:  No. CCl4 is a completely non-polar covalent compound whereas AgNO3 is ionic in nature. Therefore they are not expected to react and thus a white ppt. of silver chloride will not be formed.

Question 30. Why is a solution of potassium hydroxide used to absorb carbon dioxide evolved during the estimation of carbon present in an organic compound?
Answer:  CO2 is acidic in nature and therefore, it reacts with the strong base KOH to form K2CO3.
2KOH + CO2 ——–> K2CO3+ H2O.

Question 32. An organic compound contains 69% carbon and 4.8% hydrogen, the remainder being oxygen. Calculate the masses of carbon dioxide and water produced when 0.20 g of this compound is subjected to complete combustion.
Answer: 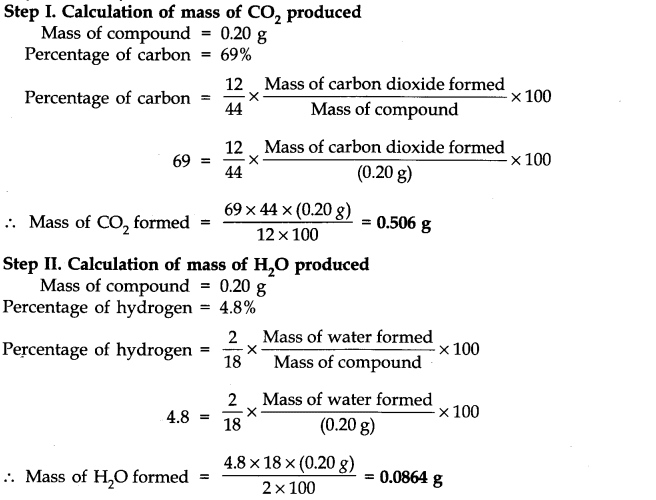 Question 33. 0.50 g of an organic compound was Kjeldahlished. The ammonia evolved was passed in 50 cm3 of IN H2SO4. The residual acid required 60 cm3 of N/2 NaOH solution. Calculate the percentage of nitrogen in the compound.
Answer: 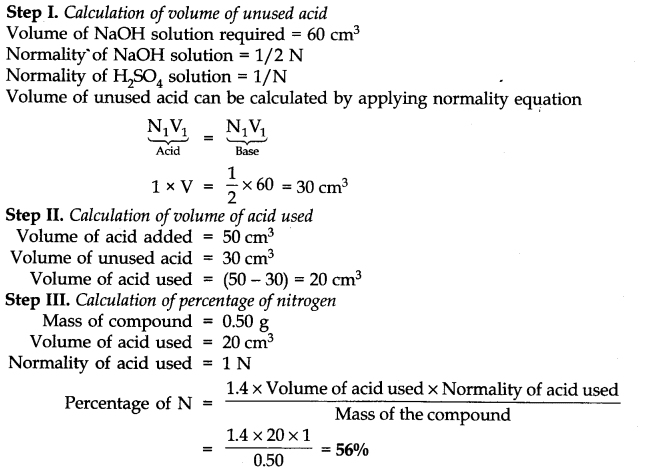 Question 38. Which of the following carbocation is most stable?

Answer: (b) is the most stable since it is a tertiary carbocation.

Question 39. The best and latest technique for isolation, purification and separation of organic compounds is: (a) Crystallisation (b) Distillation
(c) Sublimation (d) Chromatography.
Answer: (d) is the correct answer.

Question 1. How will you separate a mixture of two organic compounds which have different solubilities in the same solvent?
Answer: By fractional crystallisation.

Question 2. An organic liquid decomposes below its boiling point. How will you purify it?
Answer: By distillation under reduced pressure.

Question 8. What type of solids are separated by fractional crystallisation?
Answer: Those solids which are soluble in the same splvent but to a different extent i.e., differ in their solubility.

Question 11. Which method is used to extract a compound in aqueous solution?
Answer: Differential extraction.

Question 12. In Carius method, sulphur is estimated by precipitating it as which compound?
Answer:  BaSO4.

Question 13. Which elements are estimated by Liebig’s Method?
Answer:  Carbon and hydrogen.

Question 14. Which type of compounds are purified by steam distillation?
Answer: Steam volatile and insoluble in water.

Question 16. How will you separate a mixture of Iodine and sodium chloride!
Answer: Sublimation.

Question 17. Why is an organic compound fused with sodium in Lassaigne’s test?
Answer:  It is because sodium is highly reactive and it reacts with elements to form ionic compounds.

Question 18. Write the name of element which is confirmed on adding Na2[Fe(CN)5NO] in sodium extract solution due to appearance of violet colouration.
Answer: Sulphur.

Question 2. (a) What do you understand by Homolytic fission?
(b) What are carbanions? Give an example.
Answer: (a) Homolytic fission is breaking of a bond in such a manner that each atom takes one electron each to form free radicals.
A——-B ———-> A + B
(b) Organic ions which contain a negatively charged carbon atom are called carbanions. e.g., CH3–is carbanion. 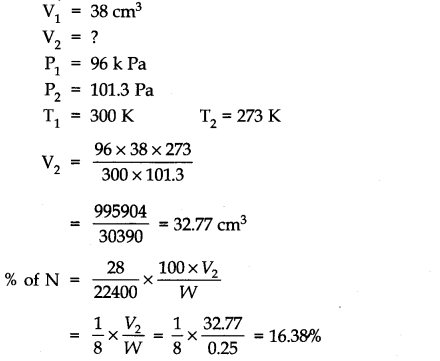 Question 7. 0.15 g of an organic compound gave 0.12 g of Ag Br by the Carius method. Find percentage of Br in the compound.
Answer:

Question 8. 0 .12 g of an organic compound containing phosphorous gave 0.22 g of Mg2 P2O7 by usual analysis. Calculate the percentage of phosphorous in the compound.
Answer:

Question 9. (a) Which is more suitable method for the purification of a compound in liquid state which decomposes at or below its boiling point?
(b) How will you separate a mixture of ammonium chloride and common salt?
Answer: (a) Distillation under reduced pressure or vacuum distillation (b) Sublimation.

Question 2. (a) What is the basic principle involved in the estimation of nitrogen by Dumas method.
(b) In a Dumas nitrogen estimation method, 0.30 g of an organic compound gave 50 cm3 of N2 collected at 300 K and 715 mm Hg pressure. Calculate the percentage composition of nitrogen in the compound. (Vapour pressure of water at 300 K is 15 mm Hg)
Answer: (a) This method is based upon the fact that nitrogenous compound is heated with
copper oxide in an atmosphere of carbon dioxide yield free nitrogen. 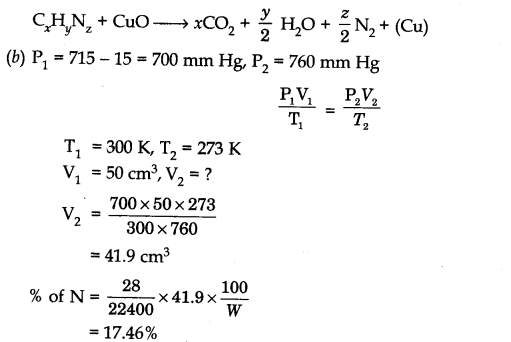 Question 1. The large number of organic compounds is due to
(a) the valency of carbon (b) a small size of carbon
(c) a special property of carbon known as catenation
Question 2. The IUPAC name of

(a)carbocation formation (b) free-radical mechanism
(c) carbanion formation (d) none of these
Question 6. The hybridization state of a carbocation is
(a) sp4 (b) sp3 (c) sp2 (d) sp
Question 7. Which of the following are electrophiles?
(a) Dimethyl sulphide (b) Bromides (c) Carbon dioxide (d) Ammonia

Question 8. Which of the following compounds will exhibit cis-trans isomerism?
(a) 2-Butene (b) 2-Butyne (c) 1-Butene (d) 2-Butanol
Question 9.

Question 3. Why is an organic compound fused with Sodium for testing nitrogen, halogens and sulphur?
Answer: On fusing with sodium metal the elements present in an organic compound are converted into sodium salts which are water soluble which can be filtered and detected by the respective tests.