Question 10. 2. Explain why
(a) The angle of contact of mercury with glass is obtuse, while that of water with glass is acute.
(b) Water on a clean glass surface tends to spread out while mercury on the same surface tends to form drops. (Put differently, water wets glass while mercury does not.)
(c) Surface tension of a liquid is independent of the area of the surface.
(d) Water with detergent dissolved in it should have small angles of contact.
(e) A drop of liquid under no external forces is always spherical in shape.
Answer: (a) Let a drop of a liquid L be poured on a solid surface S placed in air A. If TSL,and TSA be the surface tensions corresponding to solid-liquid layer, liquid-air layer and solid-air layer respectively and θ be the angle of contact between the liquid and solid, then

TLA Cos θ + TSL =TSA
=>Cos θ=TSA-TSL/TLA
For the mercury-glass interface, TSA< TSL. Therefore, cos 0 is negative. Thus θ is an obtuse angle. For the water-glass interface, TSA > TSL. Therefore cos 0 is positive. Thus, θ is an acute angle.
(b) Water on a clean glass surface tends to spread out i.e., water wets glass because force of cohesion of water is much less than the force of adhesion due to glass. In case of mercury force of cohesion due to mercury molecules is quite strong as compared to adhesion force due to glass. Consequently, mercury does not wet glass and tends to form drops.
(c) Surface tension of liquid is the force acting per unit length on a line drawn tangentially to the liquid surface at rest. Since h as force is independent of the area of liquid surface therefore, surface tension is also independent of the area of the liquid surface.
(d) We know that the clothes have narrow pores or spaces which act as capillaries. Also, we know that the rise of liquid in a capillary tube is directly proportional to cosθ (Here θ is the angle of contact). As θ is small for detergent, therefore cos θ will be large. Due to this, the detergent will penetrate more in the narrow pores of the clothes.
(e) We know that any system tends to remain in a state of minimum energy. In the absence of any external force for a given volume of liquid its surface area and consequently. Surface energy is least for a spherical shape. It is due to this reason that a liquid drop, in the absence of an external force is spherical in shape.

Question 10. 3. Fill in the blanks using the words from the list appended with each statement:
(a) Surface tension of liquids generally…………….with temperature. (increases/decreases)
(b) Viscosity of gases………………..with temperature, whereas viscosity of liquids…………..with temperature. (increases/decreases)
(c) For solids with elastic modulus of rigidity, the shearing force is proportional to…………………..while for fluids it is proportional to…………. (shear strain/rate of shear strain)
(d) For a fluid in steady flow, the increases inflow speed at a constriction follows from…………………………. while the decrease of pressure there follows from………………….(conservation of mass/Bernoulli’s principle)
(e) For the model of a plane in a wind tunnel, turbulence occurs at a…………….speed than the critical speed for turbulence for an actual plane. (greater/smaller)
Answer: (a), decreases
(b) increases; decreases
(c) shear strain; rate of shear strain
(d) conservation of mass; Bernoulli’s principle
(e) greater.

Question 10. 4. Explain why
(a) To keep a piece of paper horizontal, you should blow over, not under, it.
(b) When we try to close a water tap with our fingers, fast jets of water gush through the openings between our fingers.
(c) The size of a needle of a syringe controls flow rate better than the thumb pressure exerted by a doctor while administering an injection.
(d) A fluid flowing out of a small hole in a vessel results in a backward thurst on the vessel.
(e) A spinning cricket ball in air does not follow a parabolic trajectory.
Answer:  (a) When we blow over the piece of paper, the velocity of air increases. As a result, the pressure on it decreases in accordance with the Bernoulli’s theorem whereas the pressure below remains the same (atmospheric pressure). Thus, the paper remains horizontal.
(b) By doing so the area of outlet of water jet is reduced, so velocity of water increases according to equation of continuity av = constant.
(c) For a constant height, Bernoulli’s theorem is expressed as P +1/2 ρ v2 = Constant
In this equation, the pressure P occurs with a single power whereas the velocity occurs with a square power. Therefore, the velocity has more effect compared to the pressure. It is for this reason that needle of the syringe controls flow rate better than the thumb pressure exerted by the doctor.
(d) This is because of principle of conservation of momentum. While the flowing fluid carries forward momentum, the vessel gets a backward momentum.
(e) A spinning cricket ball would have followed a parabolic trajectory has there been no air. But because of air the Magnus effect takes place. Due to the Magnus effect the spinning cricket ball deviates from its parabolic trajectory.

Question 10. 5. A 50 kg girl wearing high heel shoes balances on a single heel. The heel is circular with a diameter 1.0 cm. What is the pressure exerted by the heel on the horizontal floor?
Answer:

Question 10. 8. A hydraulic automobile lift is designed to lift cars with a maximum mass of 3000 kg. The area of cross-section of the piston carrying the load is 425 cm2. What maximum pressure would the smaller piston have to bear?
Answer:

This is also the maximum pressure that the smaller piston would have to bear.

Question 10. 13.  Glycerine flows steadily through a horizontal tube of length 1.5 m and radius 1.0 cm. If the amount of glycerine collected per second at one end is 4.0 x 10-3 kg s-1, what is the pressure difference between the two ends of the tube? (Density of glycerine = 1.3 x 103 kg m-3 and viscosity of glycerine = 0.83 Pa s). [You may also like to check if the assumption of laminar flow in the tube is correct],
Answer: 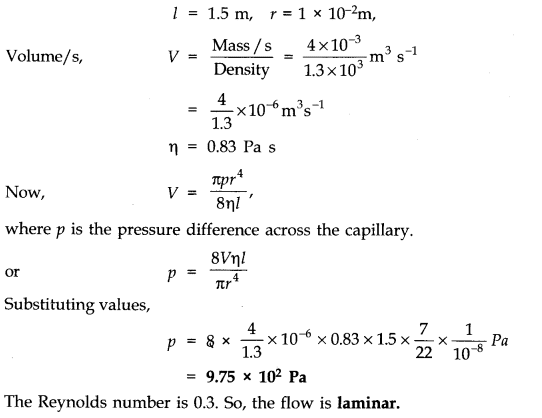 Question 10. 15. Figures (a) and (b) refer to the steady flow of a (non-viscous) liquid. Which of the two figures in incorrect? Why?

Answer: Figure (a) is incorrect. It is because of the fact that at the kink, the velocity of flow of liquid is large and hence using the Bernoulli’s theorem the pressure is less. As a result, the water should not rise higher in the tube where there is a kink (i.e., where the area of cross-section is small).

Question 10. 16. The cylindrical tube of a spare pump has a cross-section of 8.0 cm2 one end of which has 40 fine holes each of diameter 1.0 mm. If the liquid flow inside the tube is 1.5 m min-1, what is the speed of ejection of the liquid through the holes?
Answer: 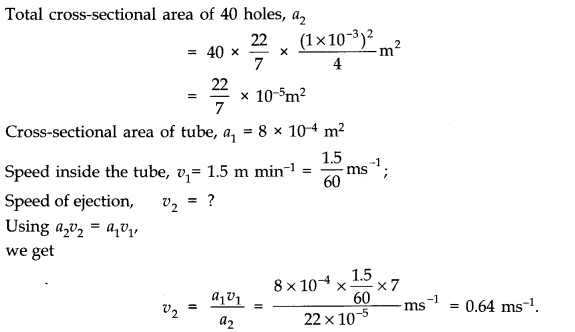 Question 10. 18. Figure (a) below shows a thin film supporting a small weight = 4.5 x 10-2 N. What is the weight supported by a film of the same liquid at the same temperature in Fig. (b) and (c) Explain your answer physically.

Since data is correct up to three significant figures, we should write total pressure inside the drop as 1.01 x 105  Pa. 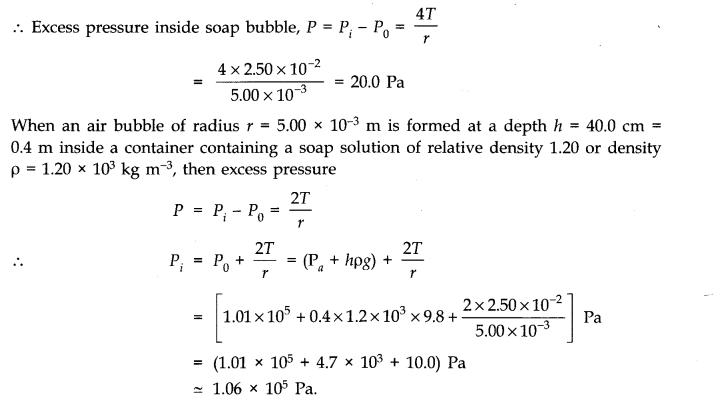 Question 10. 21. A tank with a square base of area 1.0 m2 is divided by a vertical partition in the middle. The bottom of the partition has a small-hinged door of area 20 cm2. The tank is filled with water in one compartment, and an acid (of relative density 1.7) in the other, both to a height of 4.0 m. Compute the force necessary to keep the door close.
Answer:

Question 10. 22. A manometer reads the pressure of a gas in an enclosure as shown in Fig. (a) When a pump removes some of the gas, the manometer reads as in Fig. (b). The liquid used in the manometers is mercury and the atmospheric pressure is 76 cm of mercury.
(a) Give the absolute and gauge pressure of the gas in the enclosure for cases (a) and (b), in units of cm of mercury.
(b) How would the levels change in case (b) if 13.6 cm of water (immiscible with mercury) is poured into the right limb of 1 the manometer? Ignore the small change in the volume of the gas. 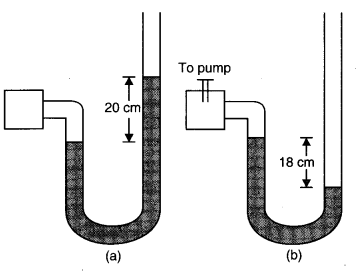 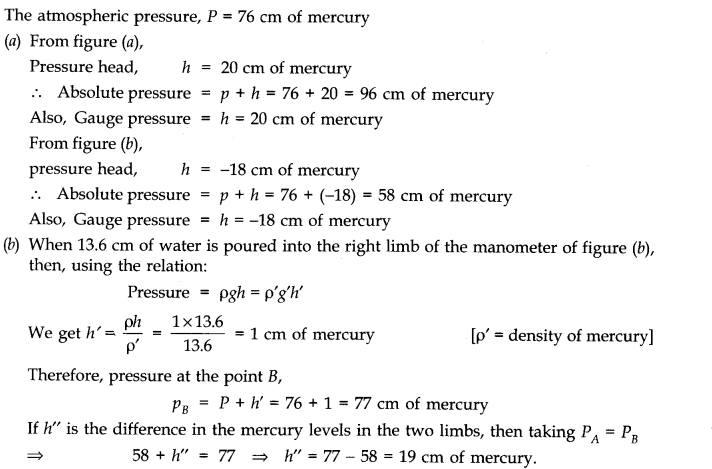 Question 10. 29. Mercury has an angle of contact equal to 140° with soda-lime glass. A narrow tube of radius 1.0 mm made of this glass is dipped in a trough containing mercury. By what amount does the mercury dip down in the tube relative to the liquid surface outside? Surface tension of mercury at the temperature of the experiment is 0.465 Nm-2. Density of mercury = 13.6 x 10 kg m-3
Answer: 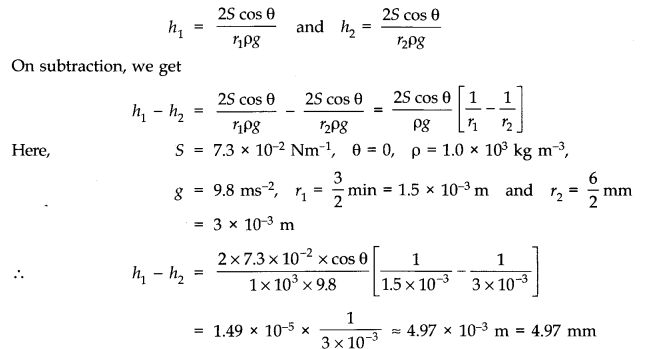 Question 10. 31. (a) It is known that density p of air decreases with height y as

where ρ = 1.25 kg m-3 is the density at sea level, and y is a constant. This density variation is called the law of atmospheres. Obtain this law assuming that the temperature of atmosphere remains a constant (isothermal conditions). Also, assume that the value of g remains constant.
(b) A large He balloon of volume 1425 m3 is used to lift a payload of 400 kg. Assume that the balloon maintains a constant radius as it rises. How high does it rise?[Take y = 8000 m and ρHe = 0.18 kg m-3].
Answer:  (a) We know that rate of decrease of density p of air is directly proportional to the height y. It is given as   dρ/dy = – ρ/y
where y is a constant of proportionality and -ve sign signifies that density is decreasing with increase in height. On integration, we get 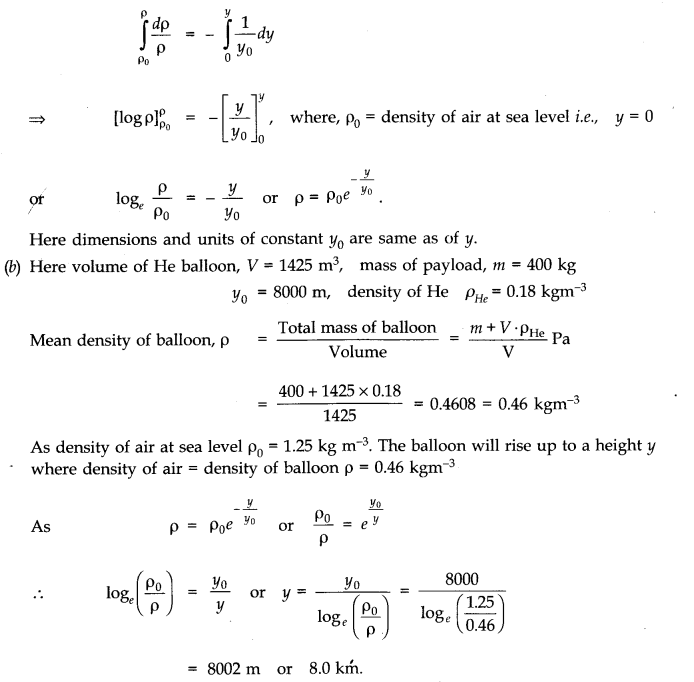