14.1 Glucose or sucrose are soluble in water but cyclohexane and benzene (simple six membred ring compounds) are insoluble in water Explain.
Ans. The .solubility of a solute in a given solvent follows the rule ‘ Like dissolves like’.Glucose contains five and sucrose contains eight -OH groups. These -OH groups form H-bonds with water. As a result of this extensive intermoleeular H-bonding, glucose and sucrose are soluble in water.On the other hand, benzene and cyclohexane do not contain -OH bonds and hence do not form H-bonds with water. Moreover, they are non-polar molecules and hence do not dissolve in polar water molecules.

14.2 What are the expected products of hydrolysis of lactose?
Ans. Lactose being a disaccharide gives two molecules of monosaccharides Le. one molecule each of D-(+) – glucose and D-(+)-galactbse.

14.3 How do you explain the absence of aldehyde group in the pentaacetate of D-glucose?
Ans. The cyclic hemiacetal form of glucose contains an -OH group at C-l which gets hydrolysed in aqueous solution to produce open chain aldehydic form which then reacts with NH2OH -to form corresponding oxime. Thus, glucose contains an aldehydic group. However, when glucose is reacted with acetic anhydride, the -OH group at C-l along with the other -OH groups at C-2, C-3, C-4 and C-6 form a pentaacetate.
Since the penta acetate of1 glucose does not contain a free -OH group at C-l, it cannot get hydrolysed in aqueous solution to produce open chain aldehydic form and hence glucose pentaacetate does not react with NH2OH to form glucose oxime. The reactions are shown as: 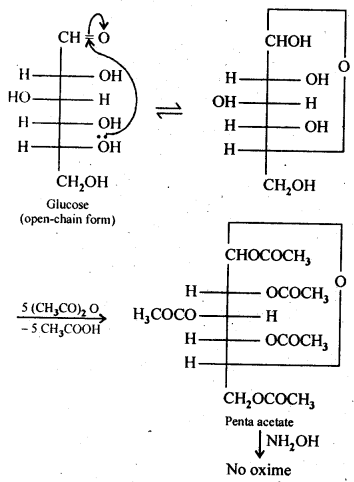 14.6 Why cannot Vitamin C be stored in our body?
Ans. Vitamin C cannot be stored in the body because it is water soluble and is, therefore, easily excreted in urine.

14.7 What products would be formed when a nucleotide from DNA containing thymine is hydrolysed?
Ans. The products obtained are 2-deoxy-D-ribose, . phosphoric acid and thymine.

14.8 When RNA is hydrolysed, there is no relationship among the quantities of different bases obtained. What does this fact suggest about the structure of RNA?
Ans. A DNA molecule has two strands in which the four complementary bases pair each other, i.e., cytosine (C) always pair with guanine (G) while thymine (T) always pairs with adenine (A). Thus, when a DNA molecule is hydrolysed, the molar amounts of cytosine is always equal to that of guanine and that of adenine is always equal to thymine.In RNA, there is no relationship between the quantities of four bases (C, G, A and U) obtained, therefore, the base pairing principle, i.e. A pairs with U and C pairs with G is not followed. Therefore, unlike DNA, RNA has a single strand.

14.1 What are monosaccharides ?
Ans. Monosaccharides are carbohydrates Which cannot be hydrolysed to smaller molecules.Their general formula is (CH2O)n Where n=3-7 These are of two types: Those which contain an aldehyde group (-CHO) are called aldoses and those which contain a keto (C=O) group are called ketoses.
They are further classified as trioses , tetroses ,pentoses , hexoses and heptoses according as they contain 3,4,5,6, and 7 carbon atoms respectively.For example. 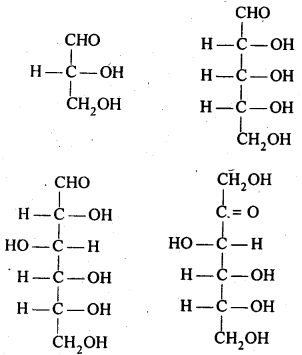 14.6 What is glycogen? How is it different from starch?
Ans. Glycogen is a condensation polymer of α-D glucose. Starch is not a single compound but is a mixture of two components—a water soluble component called amyldse (15- 20%) and water insoluble component amylopectin (80 – 85%). Amylose is a linear polymer of α – D – glucose. But both glycogen and amylopectin are branched polymers of α – D – glucose; father glycogen is more highly branched than amylopectin as amylopectin chains consists of 20 – 25 glucose units, glycogen chains consist of 10 – 14 glucose units. 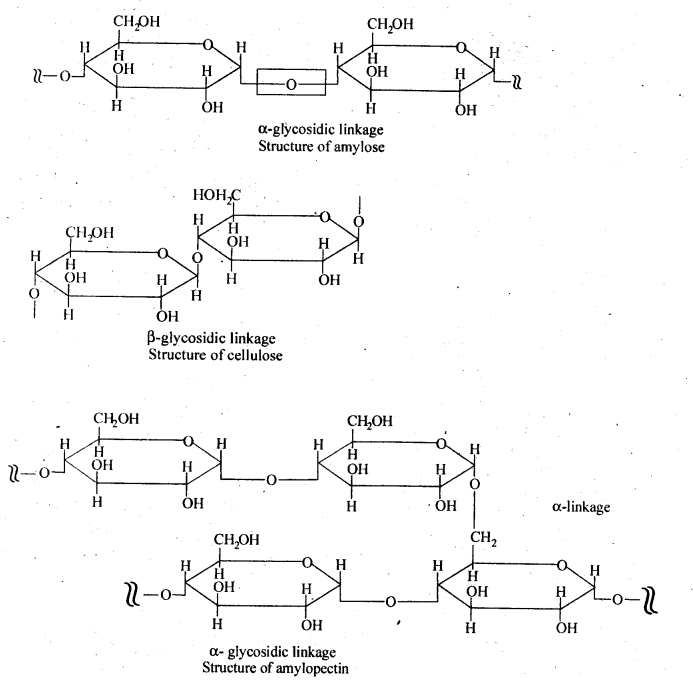 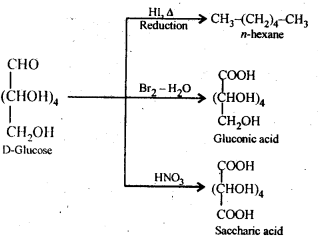 14.10 Enumerate the reactions of D-glucose which cannot be explained by its open chain structure.
Ans. (a) D (+) – glucose does not undergo certain characteristic reactions of aldehydes, e.g., glucose does not form NaHSO3 addition product.
(b)Glucose reacts with NH2OH to form an oxime but glucose pentaacetate does not. This implies that the aldehydic group is absent in glucose pentaacetate.
(c)D – (+) – glucose exists in two stereoisomeric forms, i.e., α -glucose and β-glucose.
(d)Both α – D – glucose and β – D – glucose undergo mutarotation in aqueous solution. Although the crystalline forms of α-  and β -D (+) – glucose are quite stable in aqueous solution but each form slowly changes into an equilibrium mixture of both.
(e)D (+) – glucose forms two isomeric methyl glucosides. Aldehydes normally react with two moles of methanol per mole of the aldehyde to form an acetal but D (+) – glucose when treated with methanol in presence of dry HCl gas, reacts with only one mole of methanol per mole of glucose to form a mixture of two methyl D – glucosides i. e., methyl – α – D – glucoside (melting point 43 8 K, specific rotation +158°) and methyl – β – D – glucoside (melting point 308 K, specific rotation – 33°).

14.12 Define the following as related to proteins:
(i)Peptide linkage
(ii)Primary structure
(iii)Denaturation
Ans. (i) Peptide bond: Proteins are condensation polymers of α-amino acids in which the same or different α-amino acids are joined by peptide bonds. Chemically, a peptide bond is an amide linkage formed between – COOH group of one α-amino acid and -NH-, group of the other α-amino acid by loss of a molecule of water. For example, 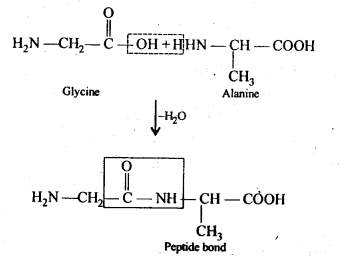 (iii) Denaturation: Each protein in the biological system has a unique three-dimensional structure and has specific biologicalactivity. This is called native form of a protein. When a protein in its native form is subjected to a physical change such as change in temperature or a chemical change like change in pH, etc., hydrogen bonds gets broken. As a result, soluble forms of proteins such as globular proteins undergo coagulation or precipitation to give fibrous proteins which are insoluble in water. This coagulation also results in loss of biological activity of the proteins and this loss in biological activity, is called denaturation. During denaturation, 2° and 3° structures of proteins are destroyed but 1° structure remains intact.
The most common example of denaturation of proteins is the coagulation of albumin present in the white of an egg. When the egg is boiled hard, the soluble globular protein present in it is denatured and is converted into insoluble fibrous protein.

14.15 Differentiate between globular and fibrous proteins.
Ans. (i) Fibrous proteins: These proteins consist of linear thread like molecules which tend to lie side by side (parallel) to form fibres. The polypeptide chains in them are held together usually at many points by hydrogen bonds and some disulphide bonds. As a result,intermolecular forces of attraction are very’ strong and hence fibrous proteins are insoluble in water. Further, these proteins are stable to moderate changes in temperature and pH. Fibrous proteins serve as the chief structural material of animal tissues.For example, keratin in skin, hair, nails and wool, collagen in tendons, fibrosis in silk and myosin in muscles.
(ii) Globular proteins: The polypeptide chain in these proteins is folded around itself in such a way so as to give the entire protein molecule an almost spheroidal shape. The folding takes place in such a manner that hydrophobic (non-polar) parts are pushed inwards and hydrophilic (polar) parts are pushed outwards. As a result, water molecules interact strongly with the polar groups and hence globular protein are water soluble. As compared to fibrous proteins, these are very sensitive to small changes of temperature and pH. This class of proteins include all enzymes, many hormones such as insulin from pancreas, thyroglobulin from thyroid gland, etc.

14.16 How do you explain the amphoteric behaviour of amino acids?
Ans. Amino acids contain an acidic (carboxyl group) and basic (amino group) group in the same molecule. In aqueous solution, they neutralize each other. The carboxyl group loses a proton while the amino group accepts it. As a result, a dipolar or zwitter ion is formed.

In zwitter ionjc form, a-amino acid show amphoteric behaviour as they react with both acids and bases. 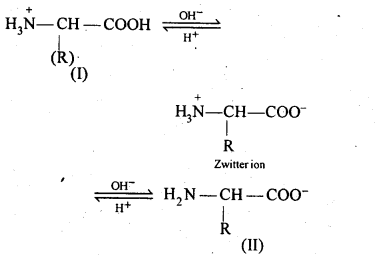 14.17 What are enzymes?
Ans. Enzymes are biological catalyst. Each biological reaction requires a different enzyme. Thus, as compared to conventional catalyst enzymes are very specific and efficient in their action. Each type of enzyme has its own specific optimum conditions of concentration, pH and temperature at which it works best.

14.19 How are vitamins classified? Name the vitamin responsible for the coagulation of blood.
Ans. Vitamins are classified into two groups depending upon their solubility in water or fat: (i) Water soluble vitamins: These include vitamin B-complex (B1, B2, B5, i.e., nicotinic acid,B6, B12, pantothenic acid, biotin, i.e., vitamin H and folic acid) and vitamin C.
(ii) Fat soluble vitamins: These include vitamins A, D, E and K. They are stored in liver and adipose (fat storing) tissues. Vitamin K is responsible for coagulation of blood.

14.21 What are nucleic acids ? Mention their two important functions.
Ans. Nucleic acids are biomolecules which are found in the nuclei of all living cell in form of nucleoproteins or chromosomes (proteins contains nucleic acids as the prosthetic group).

Nucleic acids are of two types: deoxyribonucleic acid (DNA) and ribonucleic acid.(RNA).
The two main functions of nucleic acids are:
(a) DNA is responsible for transmission of hereditary effects from one generation to another. This is due to its unique property of replication, during cell division and two identical DNA strands are transferred to the daughter cells.
(b) DNA and RNA are responsible for synthesis of all proteins needed for the growth and maintenance of our body. Actually the proteins are synthesized by various RNA molecules (r-RNA, m-RNA) and t-RNA) in the cell but the message for the synthesis of a particular protein is coded in DNA. 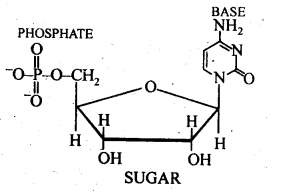 14.23 The two strands in DNA are not identical but are complementary. Explain.
Ans. The two strands in DNA molecule are held together by hydrogen bonds between purine base of one strand and pyrimidine base of the other and vice versa. Because of different sizes and geometries of the bases, the only possible pairing in DNA are G (guanine) and C (cytosine) through three H-bonds, (i.e.,C = G) and between A (adenine) and T (thiamine) through two H-bonds (i.e., A = T). Due to this base -pairing principle, the sequence of bases in one strand automatically fixes the sequence of bases in the other strand. Thus, the two strands are complimentary and not identical.

14.24 Write the important structural and functional differences between DNA and RNA.
Ans.