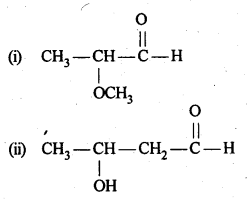 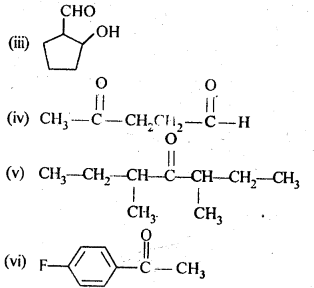 12.2 Write the structures of products of following reactions: 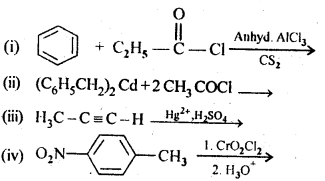 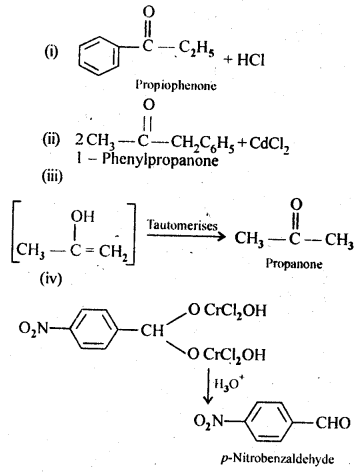 12.3 Arrange the following compounds in increasing order of their boiling points:
CH3CHO, CH3CH2OH ,CH3OCH3, CH3CH2CH3
Ans.The order is : CH3CH2CH3 < CH3OCH3 < CH3CHO <CH3CH2OH
All these compounds have comparable molecular masses CH3CH2OH undergoes extensive intermolecular Il-bonding and thus its b.pt. is the highest. CH3CHO is more pdlar than CH3OCH3 so that dipole-dipoie interactions in CH3CHO are greater than in CH3OCH3. Thus, b.pt. of CH3CHO > CH3OCH3. CH3CH2CH3 has only weak van der waals forces between its molecules and hence has the lowest b.pt.

12.4 Arrange the following compounds in increasing order of their reactivity in nucleophilic addition reactions
(i)Ehtanal, propanaL, propanone, butanone
(ii)Benzaldehyde,p-Tolualdehyde, p-Nitrobenzaldehyde, acetophenone.
Ans. (i) Butanone < Propanone < Propanal < Ethanal .This is because as the no. of alkyl groups attached to carbonyl carbon increases, +I-effect increases. As a result, e– density 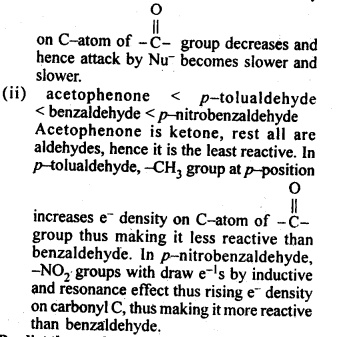 12.5.Predict the products of the following reactions: 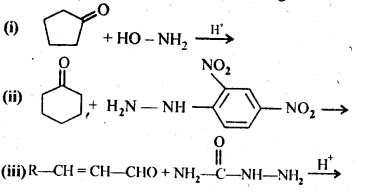 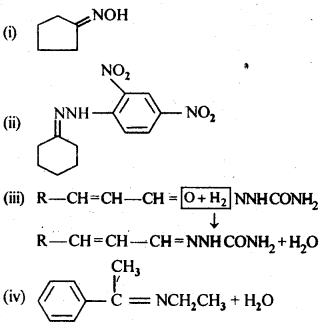 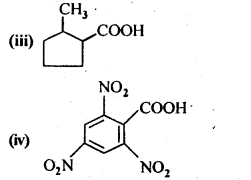 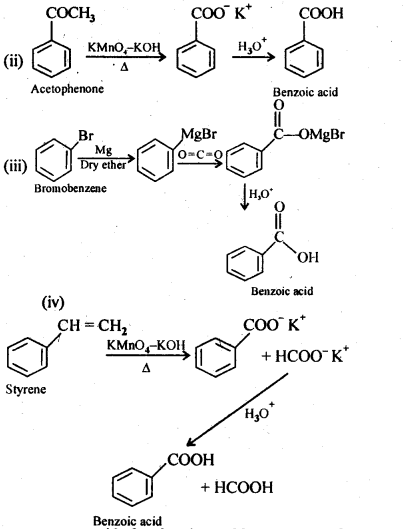 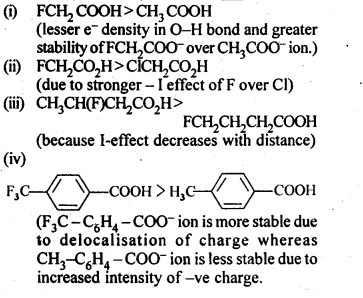 12.1 What is meant by the following terms? Give an example of the reaction in each case.
(i) Cyanohydrin (ii) Acetal (iii) Semicarbazone
(iv) Aldol (v) Hemiacetal (vi) Oxime
(vii) Ketal (viii) Imine (ix) 2,4-DNP derivative
(x) Schiff’s base.
Ans. (i) Cyanohydrin: gem-Hydroxynitriles, i.e., compounds possessing hydroxyl and cyano groups on the same carbon atom are called cyanohydrins. These are produced by addition of HCN to aldehydes or ketones in a weakly basic medium.

(ii) gem – Dialkoxy compounds in which the two alkoxy groups are present on the terminal carbon atom are called acetals. These are produced by the action of an aldehyde with two equivalents of a monohydric alcohol in presence of dry HCl gas.

These are easily hydrolysed by dilute mineral acids to regenerate the original aldehydes. Therefore, these are used for the protection of aldehyde group in organic synthesis.
(iii) Semicarbazones are derivatives of aldehydes and ketones and are produced by action of semicarbazide on them in acidic medium.

(v)gem – Alkoxyalcohols are called hemiacetals. These are produced by addition of one molecule of a monohydric alcohol to an aldehyde in presence of dry HCl gas.
(vi)Oximes are produced when aldehydes or ketones react with hydroxyl amine in weakly acidic medium.

(vii) Ketals are produced when a ketone is heated with dihydric alcohols like ethylene glycol in presence of dry HCl gas or /3-toluene sulphonic acid (PTS).

These are easily hydrolysed by dilute mineral acids to regenerate the original ketones. Therefore, ketals are used for protecting keto groups in organic synthesis.
(viii) Compounds containing -C = N – group are called imines. These are produced when aldehydes and ketones react with ammonia derivatives. 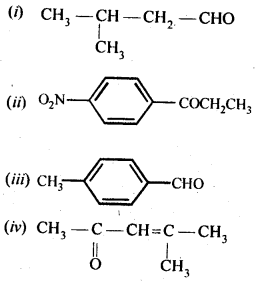 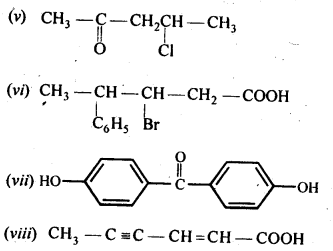 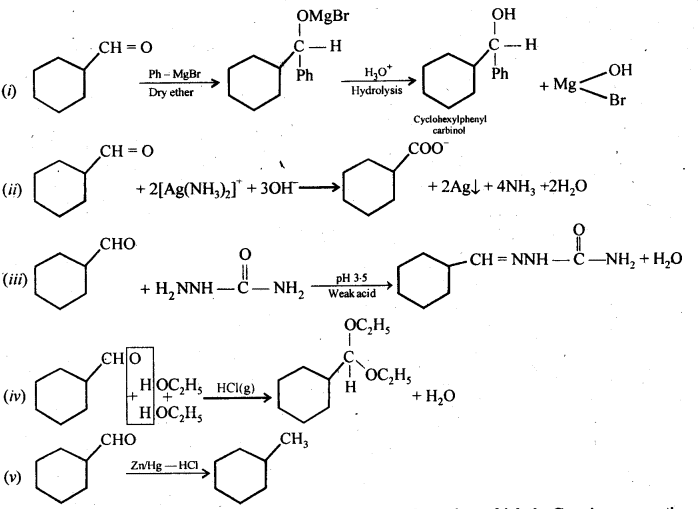 12.7Which of the following compounds would undergo aldol condensation, which the Cannizzaro reaction and which neither? Write the structures of the expected products of aldol condensation and Cannizzaro reaction.
(i)Methanal (ii) 2-Methylpentanal (iii) Benzaldehyde .
(iv) Benzophenone (v) Cyclohexanone (vi) 1-Phenylpropanone
(vii) Phenylacetaldehyde (viii) Butan-l-ol 1 (ix) 2,2-Dimethylbutanal
Ans. 2-Methylpertfanal, cyclohexanone, 1-phenylpropanone and phenylacetaldehyde contain one or more a-hydrogen and hence undergo aldol condensation. The reactions and the structures of the expected products are given below: 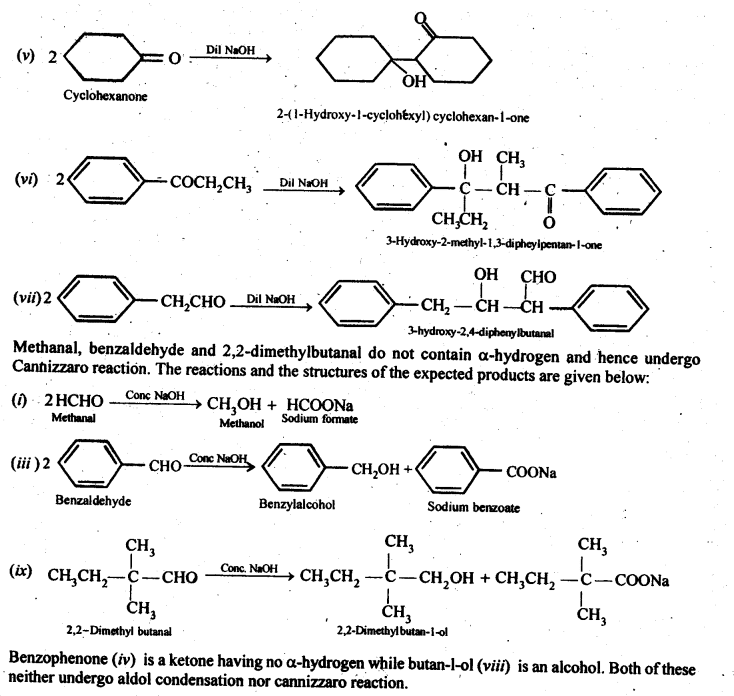 12.9 Write structural formulas and names of four possible aldol condensation products from propanal and butanal. In each case, indicate which aldehyde acts as nucleophile and which as electrophile.
Ans. 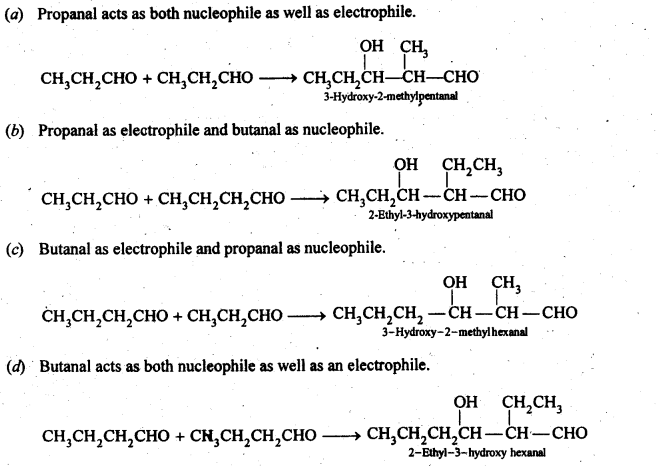 12.10 An organic compound with the molecular formula C9H10O forms 2,4-DNP derivative, reduces Tollen’s reagent and undergoes Cannizzaro reaction. On vigorous oxidation, it gives 1,2-benzenedicarboxylic acid. Identify the compound.
Ans. Since the given compound with molecular formula C9H10O forms a 2,4-DNP derivative and reduces Tollen’s reagent, it must be an aldehyde. Since it undergoes Cannizzaro reaction, therefore, CHO group is directly attached to die benzene ring.
Since on vigorous oxidation, it gives 1, 2-benzene dicarboxylic acid, therefore, it must be an ortho- substituted benzaldehyde. The only o-substituted aromatic aldehyde having molecular formula C9H10O is o-ethyl benzaldehyde. Ail the reactions can now be explained on the basis of this structure.

12.12Arrange the following compounds in increasing order of their property as indicated:
(i) Acetaldehyde, Acetone, Di-tert butyl ketone, Methyl tert-butyl ketone (reactivity towards HCN) (ii) CH3CH2CH(Br)COOH, CH3CH(Br)CH2COOH, (CH3)2CH COOH,CH3CH2CH2COOH (acid strength).
(iii) Benzoic acid, 4-Nitrobenzoic acid, 3,4-Dinitrobenzoic add, 4-Methoxybenzok acid (acid strength).
Ans. (i) The reactivity of aldehydes and ketones towards HCN addition decreases as the +1 – effect of the alkyl groups increases. Secondly it decreases with increase in steric hindrance to the nucleophilic attack byCN– at the carbonyl carbon. Thus the decreasing order of reactivity towards HCN is,

(ii)We know that + I-effect decreases while -I-effect increases the acidic strength of carboxylic acids. Since + I-effect of isopropyl group is more than that of propyl group, therefore, (CH3)2CHCOOH is a weaker acid than CH3CH2CH2COOH. Further since -I-effect decreases with distance, therefore CH3CH2CHBrCOOH is a stronger acid than CH3CHBrCH2COOH. Thus, the overall acid strength increases in the order: 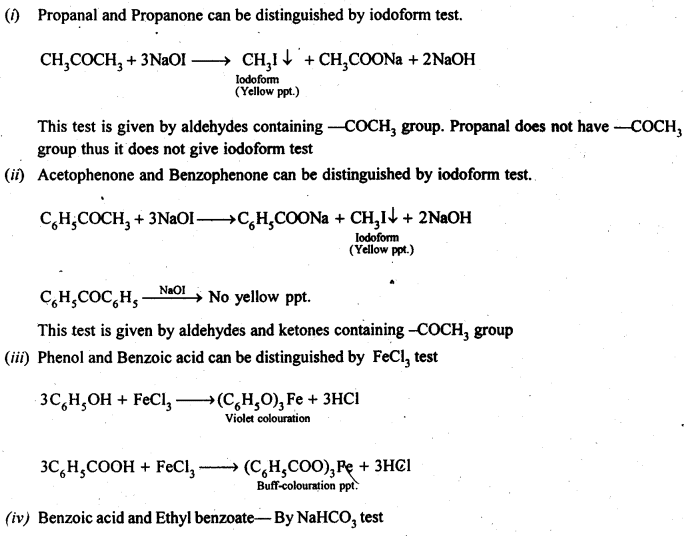 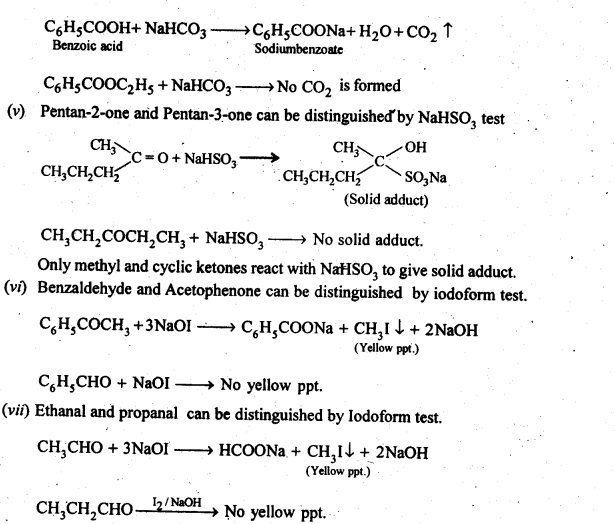 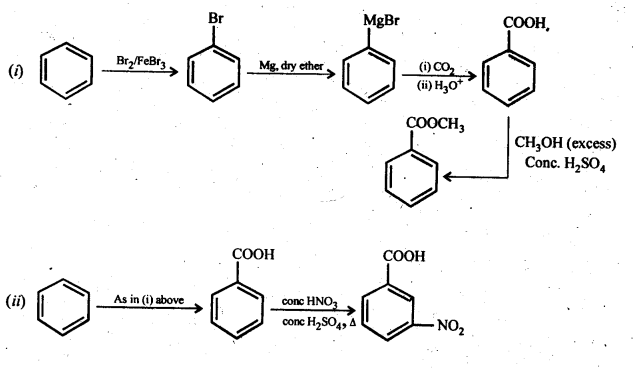 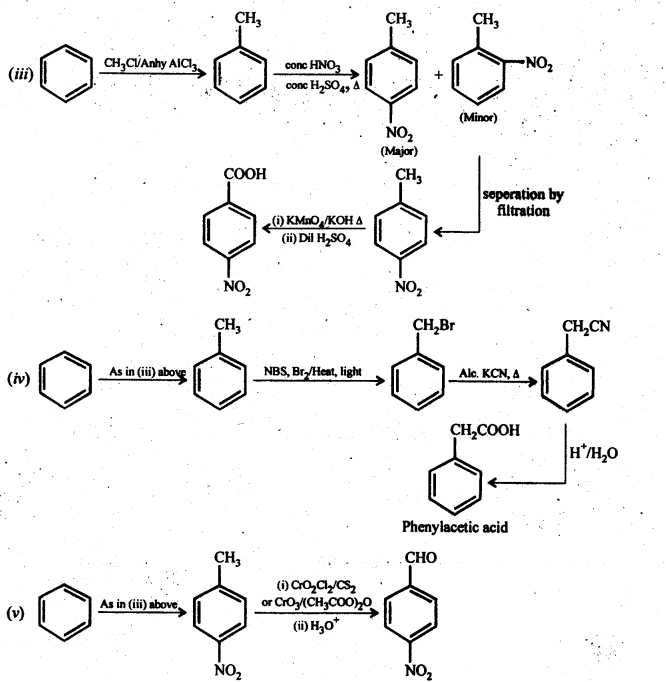 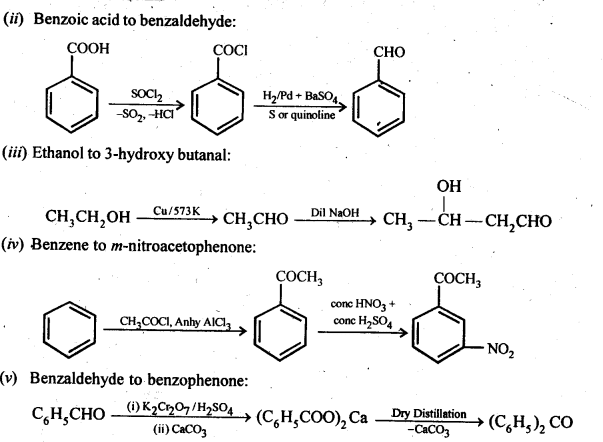 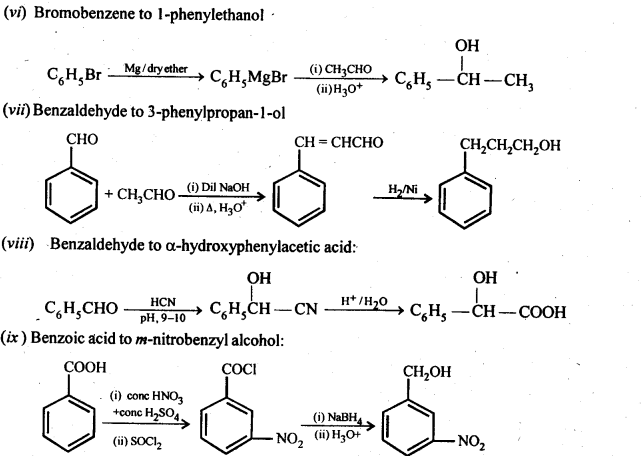 12.16 Describe the following:
(i) Acetylation (ii) Cannizzaro reaction
(iii) Cross aldol condensation (iv) Decarboxylation
Ans. (i) Acetylation refers to the process of introducing an acetyl group into a compound namely, the substitution of an acetyl group for an active hydrogen atom. Acetylation is usually carried out in presence of a base such as pyridine, dimethylanitine, etc.

(ii)Cannizzaro reaction : Aldehydes which do not contain an a-hydrogen atom, when treated with concentrated alkali solution undergo disproportionation, i.e., self oxidation reduction. As a result, one molecule of the aldehyde is reduced to the corresponding alcohol at the cost of the other which is oxidised to the corresponding carboxylic acid. This reaction is called Cannizzaro reaction. 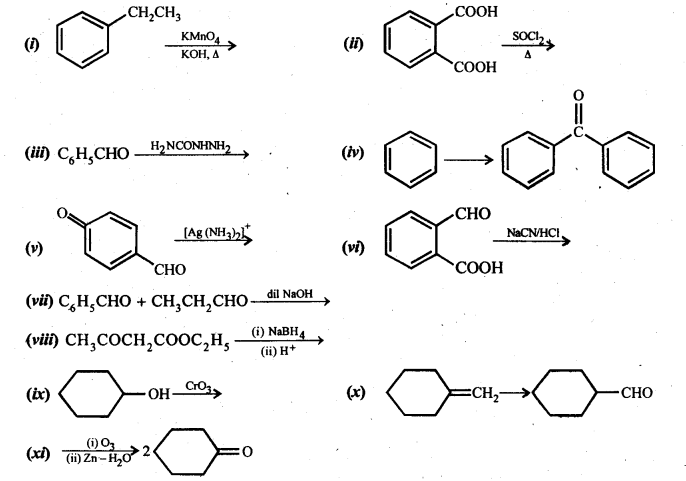 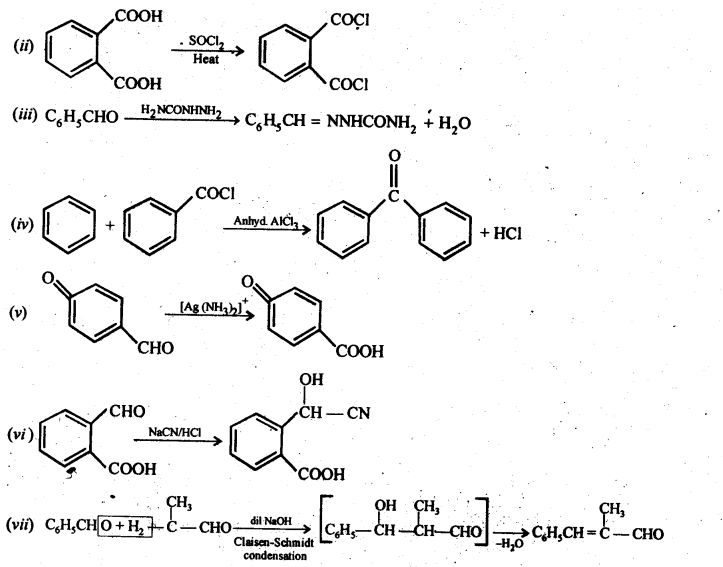 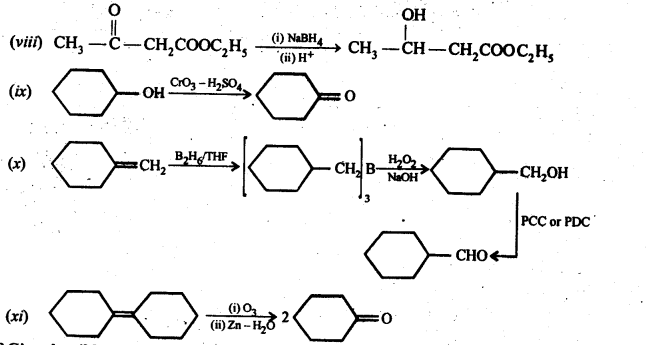 12.18 Give plausible explanation for each of the following:
(i) Cyclohexanone forms cyanohydrin in good yield but 2,2, fctrimethylcyclohexanone does not (ii) There are two – NH2 groups in semicarbazide. However, only one is involved in the formation of semicarbazones.
(iii)During the preparation of esters from a carboxylic acid and an alcohol in the presence of an acid catalyst, the water or the ester should be removed as soon as it is formed.
Ans. 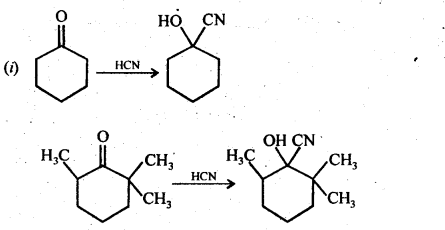 The yield of second reaction is very low because of the presence of three methyl groups at ex-positions with respect to the C = O, the nucleophilic attack by the CN– ion does not occur due to steric hinderance. Since there is no such steric hindrance in cyclohexanone, therefore, nucleophilic attack by the CN– ion occurs readily and hence cyclohexanone cyanohydrin is obtained in good yield.

Although semicarbazide has two – NH2 groups but one of them (i.e., which is directly attached to C = O) is involved in resonance as shown above. As a result, electron density on N of this -NH2 group decreases and hence it does not act as a nucleophile. In contrast, the other -NH2 group (i.e.. attached to NH) is not involved in resonance and hence lone pair of electrons present on N atom of this -NH2 group is available for nucleophilic attack on the C = O group of aldehydes and ketones.’
(iii) The formation of esters from a carboxylic acid and an alcohol in presence of an acid catalyst is a reversible reaction.

Thus to shift the equilibrium in the forward direction, the water or the ester formed should be removed as fast as it is formed.

12.19 An organic compound contains 69-77% carbon, 11-63 % hydrogen and rest oxygen. The molecular mass of the compound is 86. It does not reduce Tottens’ reagent but forms an addition compound with sodium hydrogensulphite and give positive iodoform test. On vigorous oxidation, it gives ethanoic and propanoic acid. Write the possible structure of the compound.
Ans.

In case of phenoxide ion, structures (V – VII) carry a negative charge on the less electronegative carbon atom.Therefore, their contribution towards the resonance stabilization of phenoxide ion is very small.
In structures I and II, (carboxylate ion), the negative charge is delocalized over two oxygen atoms while in structures III and IV, the negative charge on the oxygen atom remains localized only the electrons of the benzene ring are delocalized. Since delocalization of benzene electrons contributes little towards the stability of phenoxide ion therefore, carboxylate ion is much more resonance stabilized than phenoxide ion. Thus, the release of a proton from carboxylic acids is much easier than from phenols. In other words, carboxylic acids are stronger acids than phenols.