1.What are the various public health measures, which you would suggest as safeguard against infectious diseases?
Ans. The various public health measures against infectious diseases includes the following –
1.Education – People should be educated about the infectious diseases so that they may protect themselves against the infections.
2.A people suffering from any infections should be isolated to avoid its transmission to any other person.
3.Vaccination – People should get vaccination to avoid infection. Vaccination is available against cholera, typhoid, TB etc.
4.Sanitation – Sanitary surroundings can prevent spread of diseases. Public hygiene includes – suitable disposal of waste & human excreta; periodic cleaning and disinfection of water sources; observing normal practices of hygiene in public catering. Personal hygiene includes keeping the body clean, intake of clean drinking water, vegetables, fruits etc.
5.Eradication of vectors – The breeding places of vectors should be destroyed & adult vectors killed by appropriate methods.

3. Hovy does the transmission of each of the following diseases take place?
(a)Amoebiasis (b) Malaria
(c)Ascariasis (d) Pneumonia
Ans. (a) Amoebiasis – It is usually contracted by ingesting water or food contaminated by amoebic cysts.
(b)Malaria – It is transmitted from one person to another by the female Anopheles mosquito. The mosquito picks up the parasite along with the blood when it bites an infected person. When this mosquito bites an other healthy person, the parasites migrate into his blood with the saliva, which the mosquito injects before sucking up blood to prevent its clotting.
(c)Ascariasis – Transmitted through water, vegetables, fruits etc. contaminated with the eggs of the parasites.
(d)Pneumonia – Spreads by cough & sneezes, by sharing drinking glass & eating utensils with an infected person.

5. Discuss with your teacher what does ‘a suitable gene’ means, in the context of DNA vaccines.
Ans. Suitable genes refers to that gene (specific segment of DNA), encoding a protein associated with the target infectious organism, is spliced into plasmid, which is then copied & formulated as a vaccine.

8. Differentiate the following and give examples of each
(a)Innate and acquired immunity
(b)Active and passive immunity
Ans.(a) Innate & acquired immunity
Innate immunity, also called inherent, natural, non specific immunity, comprises all those defence elements with which an individual is bom & which are always available to protect a living body. It acts on many organisms and does not show specificity, e.g. Lysozyme present in secretions such as tears, catalyzes the hydrolysis of molecules in the cell walls of bacteria & interferon induces antiviral state in non infected cells. They act as physiological barriers & check the growth of many pathogenic micro-organisms. Acquired immunity, also called adaptive or specific immunity, is the immunity obtained either from the development of antibodies in .response to exposure to an antigen, as from vaccination or an attack of an infectious diseases or from the transmission of antibodies as from mother to foetus through the placenta.
(b) Active & passive immunity
Active immunity is acquired by catching & surviving an infectious disease or by vaccination with a weakened form of the diseases which makes the body to form antibodies. Whereas passive immunity is conferred by transfer of immune products like antibodies etc. from other individual

9. Draw a well-labelled diagram of an antibody
Ans. 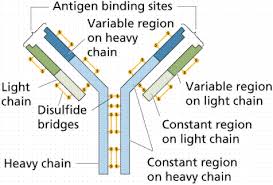 10.What are the various routes by which trans-mission of human immunodeficiency virus takes place?
Ans.Various routes by which transmission of human immunodeficiency virus takes place are (0 Illicit sexual contact.
(ii)Sexual contact with multiple partners.
(iii)Transfusion of the blood of infected person.
(iv)Intravenous drug users that shares needles are at high risk of contracting AIDS.

12.How is a cancerous cell different from a normal cell?
Ans.Cancer is a disease characterized by the excessive and abnormal growth of certain cells. In a healthy individual, the growth of cells is balanced by the rate of cell loss. Thus, when one attains adult age, the size and cellular contents of various body organs remain constant. The balance between the growth of the cells and the rate of cell class may be dislocated by certain chemicals, physical stresses and viral agents. As a result, the normal growth of the cells may be transformed into cancerous one. Cancerous cells acquire the ability to invade new sites, a phenomenon called metastasis. They exhibit a number of alterations on cell surface, in the cytoplasm, and in their genes. These features are used for the identification of cancers.

13.Explain what is meant by metastasis.
Ans.The non-regulated growth of the cells that accompanies cellular transformation produces tumours or neoplasms. Each tumour being the product of proliferation of a single abnormal cell. Malignant tumour cells are cancer cells that spread to mid take up residence in neighbouring tissues – a condition called metastasis.

14.List the harmful effects caused by alcohol/drug abuse.
Ans. Harmful effects caused by alcohol abuse are –
(i)Alcohol generates more energy mostly in the form of heat, but at the same time, it dilates the blood vessels. Consequently the ‘heat generated is rapidly lost. Due to constant dilation, the arterial walls soon become brittle & rigid. Such a change in the property of blood vessels & deposition of alcoholic fat affect the working of heart.
(ii)Alcoholism leads to gastric ulcers & gastritis.
(iii)In chronic alcoholism, the axon of the nerve inflame thus causing neuritis.
(iv)Permanent damage to liver cells occur due to deposition of fats. The liver dries up & harden (cirrhosis).
Harmful effects caused by drug abuse are – (i) Excessive doses of drugs may lead to coma & death due to respiratory failure, heart failure & cerebral haemorrhage.
(ii)Lack of interest in personal hygiene, withdrawal, isolation, depression, fatigue aggressive & rebellious behaviour etc.
(iii)Acquire serious infections like AIDS & hepatitis B, who take drugs intravenously.
(iv)The adverse effects of drugs are manifested in the form of reckless behaviour, vandalism & violence.

15.Do you think that friends can influence one to take alcohol/drugs? If yes, how may one protect himself/herself from such an influence?
Ans.Yes, friends can influence one to take drugs. Following measures can be taken:
(i)Avoiding undue peer pressure.
(ii)Not taking undue pressure of failures beyond its threshold.
(iii)Getting counselling from some counsellor
(iv)Seeking help from parents and peers
(v)Seeking medical help

16.Why is that once a person starts taking alcohol or drugs, it is difficult to get rid of this habit? Discuss it with your teacher.
Ans.Psychological & physiological dependence of an individual to the intake of certain kinds of drugs and alcohol is called addiction. Once a person start taking alcohol & drugs, it is very difficult to get rid this habit because addiction drive people to take them even when these are not needed or even when their use becomes self destructive. With repeated use of drugs, the tolerance level of the receptors present in the body increases, consequently the receptors responds only to higher doses of drugs or alcohgl leading to greater intake & addiction. Thus, the addiction potential of drugs & alcohol, pull the user into a vicious circle leading to their regular use (abuse) from which he/she may not able to get out.

18.In your view what motivates youngsters to take to alcohol or drugs and how can this be avoided?
Ans. Human have probably been using mind – affecting drugs since time immemorial. The root cause of addiction of man to drugs, smoking and drinking has been due to his inability to make mental adjustments with stresses and strains, drudgery and extreme misery in daily life. As a temporary measure, to combat these adverse situations and to have a certain degree of mental relaxation, humans have been making an extensive use of stimulants, depressants and hallucinogens. Stimulants generally speed up body process, and depressants slow them. Hallucinogens can alter a person’s thoughts, feelings, and perception.
In preventing drug abuse, the role of parents
could be:
(i)Communicate openly with the children, listen to their problems patiently and teach them how to handle the problems.
(ii)Take interest in children’s activities and their friends circle.
(iii)Set an example for children by not taking drugs or alcohol.
(iv)Keep track of prescribed drugs in home.
(v)Learn as much as possible about drugs.