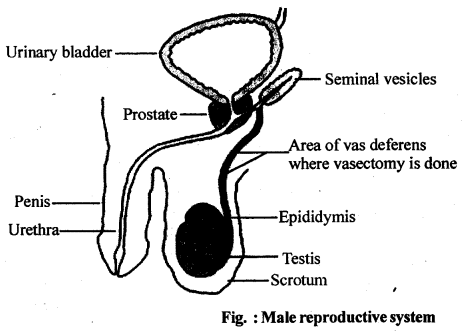 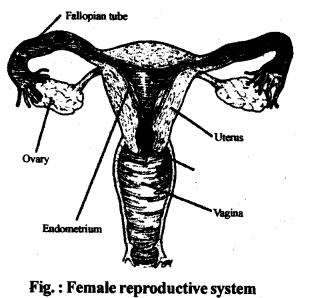 4.Write two major functions each of testis and ovary.
Ans. Testes – Testes are the primary sexual organs in male. Two major functions of testes are –
(i) Testosterone production from leydig cells. (ii) Production of sperm cells in seminiferous tubules.
Ovary – Ovaries are the primary female sex organs. Two main functions of ovaries are
(i) Productions of female germ cells called eggs or oocytes.
(ii)Production of hormones – estrogens & progesterone which affect many of the female secondary sexual characters & reproductive functions.

6. What is spermatogenesis? Briefly describe the process of spermatogenesis.
Ans. Spermatogenesis is the process of producing sperms with half the number of chromosomes (haploid) as somatic cells. It occurs in seminiferous tubules. Sperm production begins at puberty continues throughout life with several hundred million sperms be ing produced each day. Once sperm are formed they move into the epididymis, where they mature and are stored. During spermatogenesis one spermatogonium produces 4 sperms. Spermatogenesis completes through the following phases – multiplicative phase, growth phase, maturation phase & spermiogenesis. In multiplicative phase the sperm mother cells divide by mitosis & produce spermatogonia. The spermatogonia grow in size to form large primary spermatocytes by getting nourishment from sertoli cells in growth phase. Maturation phase involves meiosis I in which primary spermatocytes divide to produce secondary spermatocyte and meiosis II which produces spermatids. Thus each primary spermatocyte gives rise to four haploid spermatids. Spermiogenesis or spermateliosis is process of formation of flagellated spermatozoa from spermatids. Spermiogenesis begins in the seminiferous tubules but usually completed in epididymis. 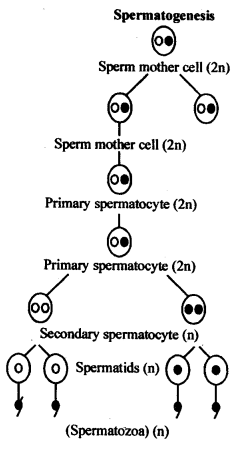 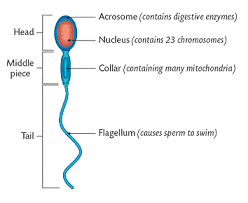 11.What are the major functions of male accessory ducts and glands?
Ans. Major functions of male-accessory ducts are
•Aid in sperm transport.
•Temporary storage of spermatozoa.
Male accessory glands secretions constitute the seminal plasma. These secretions are rich in fructose, ascorbic acid, citrate, calcium, certain enzymes and prostaglandins. These secretions nourish and activate the spermatozoa to swim.

12.What is oogenesis? Give a brief account of oogenesis.
Ans. The process of formation of a mature female gamete (ovum) is called oogenesis. It occurs in the ovaries of female reproductive system. Oogenesis is a discontinuous process it begins before birth, stops in midprocess & only resumes after menarch. It occurs in three phases : Multiplicative phase (formation of oogonia mitotically from the primary germ cells), Growth phase (growth of oogonia into primary oocyte) & Maturation phase (formation of mature ova from primary oocyte through meiosis). Maturation phase produces two haploid cells – Larger one called secondary oocyte & the smaller one called polar bodies (1st polar body). Meiosis II of secondary oocyte results in the formation of functional egg or ovum and a second polar body: The first polar body may also divide to form two polar bodies of equal sizes which do not take part in reproduction & ultimately degenerates. First maturation division may be completed in the ovaries just prior to ovulation but second one (Final) is completed outside the ovary after fertilization. Secondary oocyte is female gamete in which the 1st meiotic division is completed & second meiotic division (Metaphase stage) has begin. The egg is released at secondary oocyte stage under the effect of LH. 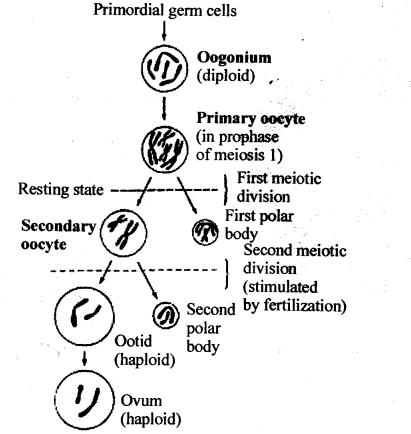 13. Draw a labelled diagram of a section through ovary.
Ans. 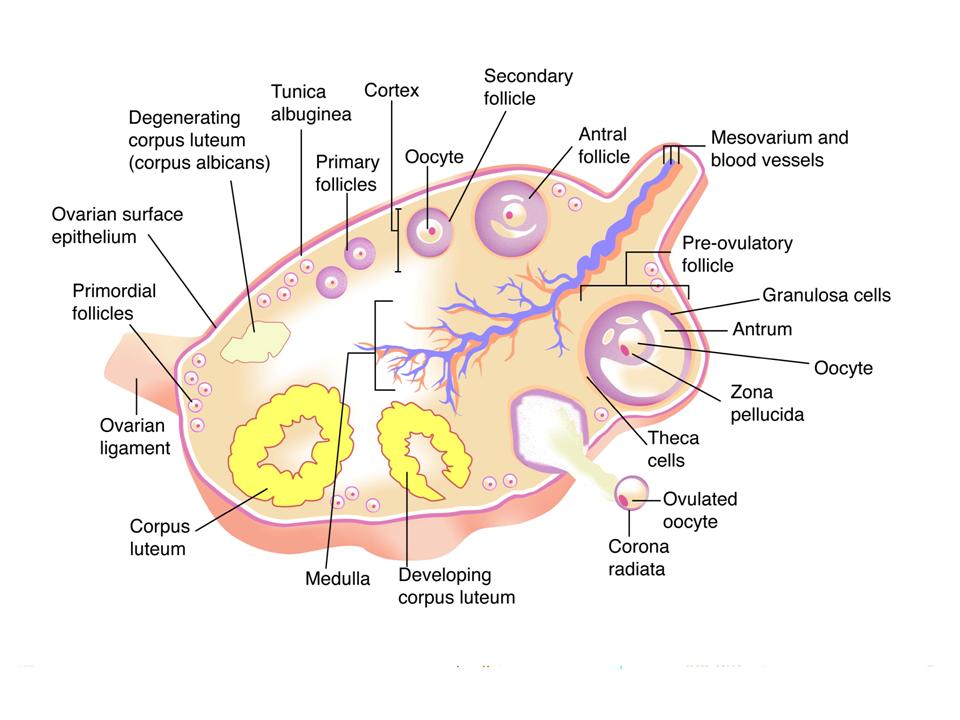 14.Draw a labelled diagram of a Graafian follicle.
Ans. 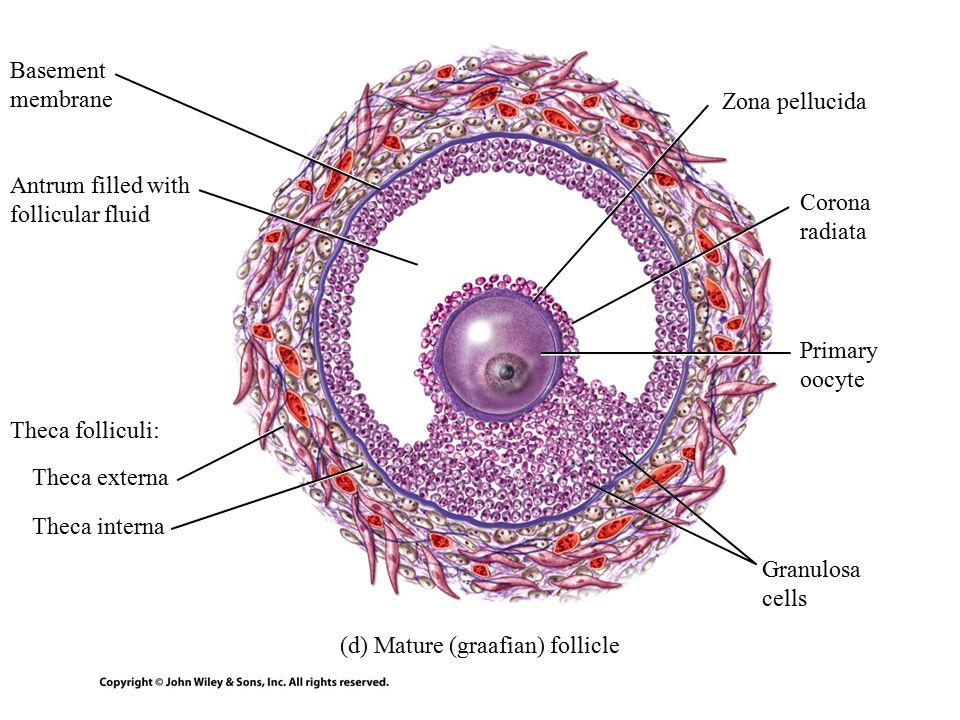 15.Name the functions of the following:
(a)Corpus luteum (b) Endometrium
(c)Acrosome (d) Sperm tail
(e) Fimbriae
Ans. (a) Corpus luteum : The corpus luteum secretes large amounts of progesterone which is essential for maintenance of the endometriuip.
(b)Endometrium is necessary for implantation of the fertilized ovum and other events of pregnancy.
(c)The acrosome is filled with enzymes that help during fertilization of the ovum.
(d)Sperm tail: Tail facilitates sperm motility which is essential for fertilization.
(e)Fimbriae: Fimbriae help in collection of the ovum after ovulation.

17.What is menstrual cycle? Which hormones regulate menstrual cycle?
Ans. Menstrual cycle is the cyclic change( itf’the reproductive tract of primate female. This period is marked by a characteristic event repeated almost every month (28 days with minor variation) in the form of a menstrual flow (i.e. shedding of the endometrium of the uterus with bleeding. It may be temporarily stopped only in pregnancy.
The hormones that regulates menstrual cycles are
(i)FSH (Follicle stimulating hormone),
(ii)LH (Luteinizing hormone),
(iii)Oestrogens,
(iv)Progesterone.

18.What is parturition? Which hormones are involved in induction of parturition?
Ans. The average duration of human pregnancy is about 9 months which is called gestation period. Vigorous contraction of the uterus at the end of pregnancy causes expulsion/delivery of the foetus. This process of delivery of the foetus is called parturition.It is induced by hormone oxytocin which acts on the uterine muscle and causes stronger uterine contractions.

19.In our society the women are often blamed for giving birth to daughters. Can you explain why this is not correct?
Ans. The sex chromosome pattern in the human females is XX and that of male is XY. Therefore, all the haploid female gametes (ova) have the sex chromosome X, however, the haploid male gametes have either X or Y. Thus 50% of sperms carry the X-chromosome while the other 50% carry the Y-chromosome. After fusion of the male and female gametes, the zygote carries either XX or XY depending upon whether the sperm carrying X or Y fertilizes the ovum. The zygote carrying XX would be a female baby and XY would be a male baby. That is why it is correct to say that the sex of the baby is determined by the father.

20.How many eggs are released by a human ovary in a month? How many eggs do you think would have been released if the mother gave birth to identical twins? Would your answer change if the twins born were fraternal?
Ans. One egg is released by human ovary in a month. Identical twins: Identical twins are formed when a single fertilized egg splits into two genetically identical parts. The twins share the same DNA set, thus they may share many similar attributes. However, since physical appearance is influenced by environmental factors and not just genetics, identical twins can actually look very different.
Fraternal twins: These twins are formed when two fertilized eggs are formed. The twins share the different DNA set, thus they may share different attributes (dizygotic embryo).