Skip to content
SQL is a language to operate databases; it includes database creation, deletion, fetching rows, modifying rows, etc. SQL is an ANSI (American National Standards Institute) standard language, but there are many different versions of the SQL language.

SQL is Structured Query Language, which is a computer language for storing, manipulating and retrieving data stored in a relational database.
SQL is the standard language for Relational Database System. All the Relational Database Management Systems (RDMS) like MySQL, MS Access, Oracle, Sybase, Informix, Postgres and SQL Server use SQL as their standard database language.
Also, they are using different dialects, such as −

SQL is widely popular because it offers the following advantages −

A Brief History of SQL

When you are executing an SQL command for any RDBMS, the system determines the best way to carry out your request and SQL engine figures out how to interpret the task.
There are various components included in this process.
These components are −
A classic query engine handles all the non-SQL queries, but a SQL query engine won’t handle logical files.
Following is a simple diagram showing the SQL Architecture − 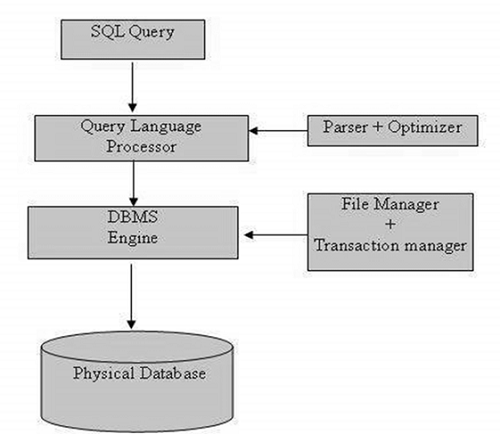 The standard SQL commands to interact with relational databases are CREATE, SELECT, INSERT, UPDATE, DELETE and DROP. These commands can be classified into the following groups based on their nature −