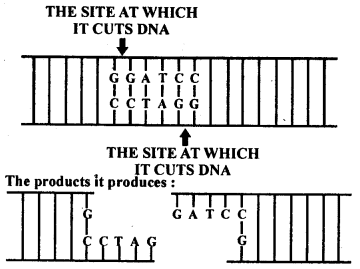 3.From what you have learnt, can you tell whether enzymes are bigger or DNA is bigger in molecular size? How did you know?
Ans. Enzymes are bigger than DNA as they are proteins and proteins are macromolecules made of amino acids which are bigger than nucleotides. This can also be proved by gel electrophoresis, where denatured protein would not move but denatured DNA will move to a distance. Protein synthesis is regulated by small portions of DNA, called genes.

6. Besides better aeration and mixing properties, what other advantages do stirred tank bioreactors have over shake flasks?
Ans. Shake flasks are used for growing and mixing the desired materials on a small scale in the laboratory. A large scale production of desired biotechnological product is done by using ‘bioreactors’. Besides better aeration and mixing properties, the bioreactors have following advantages
(i)Small volumes of cultures are periodically withdrawn from die reactor for sampling.
(ii)It has a foam control system, pH control system and temperature control system.
(iii)Facilitates even mixing and oxygen availability throughout the bioreactor.

8.Can you recall meiosis and indicate at what stage a recombinant DNA is made?
Ans. Meiosis I – Pachytene – When recombination nodule appear after synaptonemal complex formation.

9. Can you think and answer how a reporter enzyme can be used to monitor transformation of host cells by foreign DNA in addition to a selectable marker?
Ans.A reporter enzyme can be used to differentiate transformed cells by tracking down the activity of its co-responding genes (receptor gene). For e.g., (3-galactosidase (Lac Z) activity is not found in transformed cells so that they appear white in colour. The others, which appear blue in colour, indicate that cells do not carry foreign DNA.

10.Describe briefly the followings:
(a)Origin of replication
(b)Bioreactors
(c)Downstream processing
Ans. (a) Origin of Replication: This is a sequence from where replication starts and any piece of DNA when linked to this sequence can be made to replicate within the host cells. This sequence is also responsible for controlling the copy number of the linked DNA. So, if one wants to recover many copies of the target DNA it should be cloned in a vector whose origin support high copy number.
(b) Bioreactor: Bioreactors can be thought of as vessels in which raw materials are biologically converted into specific products by microbes, plant and animal cell and/or their enzymes. The bioreactor provides optimum growth conditions and facilitates achieving the desired products. The most commonly used bioreactor is of stirring type. A stirred tank bioreactor is usually a cylindrical vessel or vessel with a curved base to facilitate mixing of the contents. In the sparged stirred tank bioreactor, sterile air bubbles are sparged. The stirrer facilitates the mixing and oxygen availability throughout the bioreactor. A bioreactor has an agitator system, an oxygen delivery system, a foam control system, a temperature control system, pH control system and sampling ports.
(c) Downstream Processing : The product obtained is subjected to a series, of processes collectively called downstream processing before it is made into a finished product ready for marketing. The two main processes are separation and purification. The product is then formulated with suitable preservatives. Such formulations have to undergo clinical trials, in case of drugs.

11.Explain briefly
(a)PCR
(b)Restriction enzymes and DNA
(c)Chitinase
Ans.(a) PCR = Polymerase chain reaction (in vitro method) is a molecular biological technique for enzymatically replicating DNA without using a living organism, such as E. coli or yeast.
3 steps in PCR are –
(i)Denaturation of desired double strand DNA-to ssDNA.
(ii)Annealing of primer to ssDNA (single standard).
(iii)Extension of primer by Taq DNA polymerase isolated form Thermits aquaticus.
Uses – Amplification of desired gene/gene cloning.
Advantage- More output, greater efficiency, less error prone, less human interference and cyclic and automated.
(b) Restriction enzymes and DNA – Restriction enzymes is a group of enzymes used to cleave or cut DNA strands each having a characteristics base sequence at which it cleaves.
(i)It restricts foreign DNA from entering normal cell by digesting it at various recognition site. Recognition site is palindromic.
(ii)They are endonuclease and exonuclease both types.
(iii)They produces sticky ends. Cleavage site and recognition site are different from each other. Restriction enzymes therefore are believed to be a mechanism evolved by bacteria to resist viral attack and to help in the removal of viral sequences.
(c) Chitinase – Chitinase is a enzyme to digest or breakdown glycosidic bonds in chitin cell wall of fungal cell to facilitate its transformation.