Question 15. 1.  A string of mass 2.50 kg is under a tension of 200 N. The length of the stretched string is 20.0 m. If the transverse jerk is struck at one end of the string, how long does the disturbance take to reach the other end?
Answer: 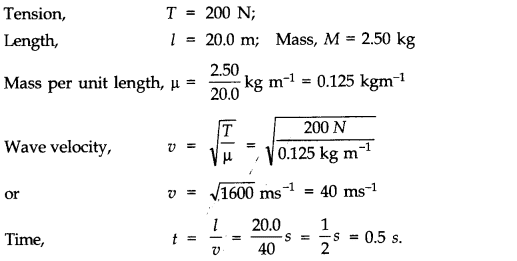 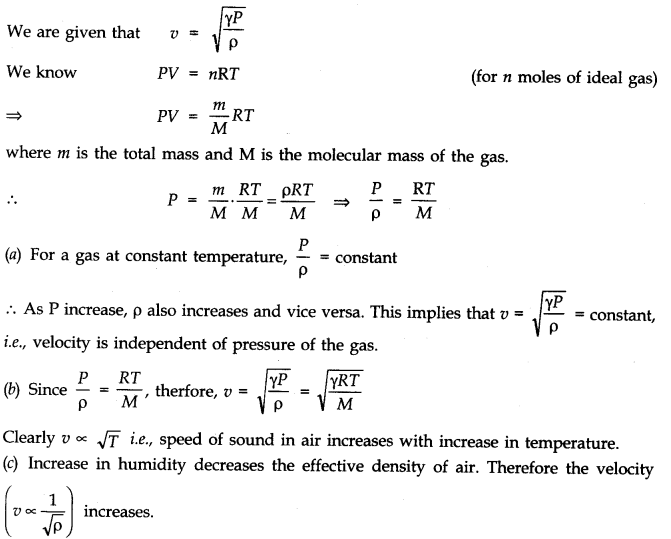 Question 15. 8. A transverse harmonic wave on a string is described by
y(x, t) = 3.0 sin (36 t + 0.018 x + π/4)
where x and y are in cm and t in s. The positive direction of x is from left to right.
(a) Is this a travelling wave or a stationary wave? If it is travelling, what are the speed and direction of its propagation ?
(b) What are its amplitude and frequency?
(c) What is the initial phase at the origin?
(d) What is the least distance between two successive crests in the wave?
Answer: 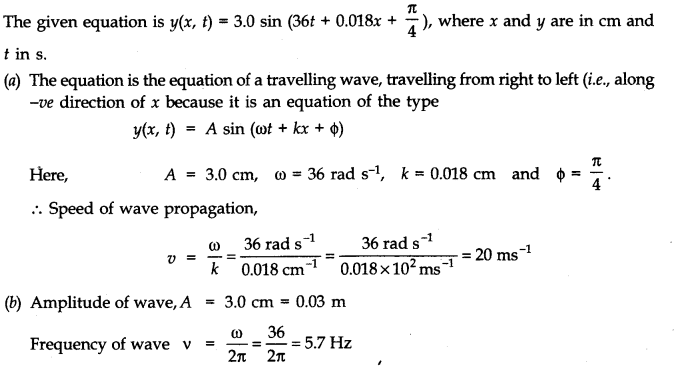 Question 15. 9. For the wave described in Exercise 8, plot the displacement (y) versus (t) graphs for x = 0, 2 and 4 cm. What are the shape of these graphs? In which aspects does the oscillatory motion in travelling wave differ from one point to another : amplitude, frequency or phase?
Answer: The transverse harmonic wave is

Using the values of t and y (as in the table), a graph is plotted as under The graph obtained is sinusoidal.
Similar graphs are obtained for y x = 2 cm and x = 4 cm. The (incm) oscillatory motion in the travelling wave only differs in respect of phase. Amplitude and frequency of oscillatory motion remains the same in all the cases. 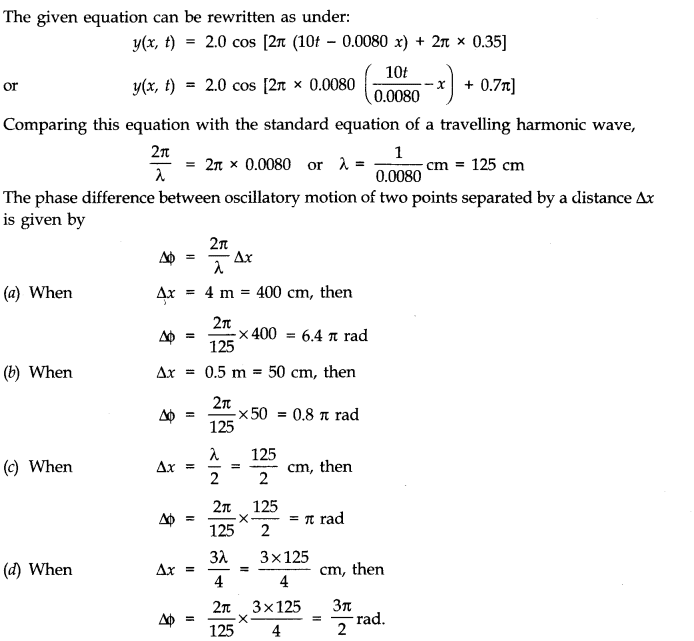 Question 15. 11. The transverse displacement of a string (clamped at its two ends) is given by y(x, t) = 0.06 sin 2π /3 x cos (120π t)
where x, y are in m and t in s. The length of the string is 1.5 m and its mass is 3 x 10-2 kg. Answer the following:
(i) Does the function represent a travelling or a stationary wave?
(ii) Interpret the wave as a superimposition of two waves travelling in opposite directions. What are the wavelength, frequency and speed of propagation of each wave?
(iii) Determine the tension in the string.
Answer:  The given equation is
y(x, t) = 0.06 sin 2π/3 x cos 120 πt …(1)
(i)As the equation involves harmonic functions of x and t separately, it represents a stationary wave. 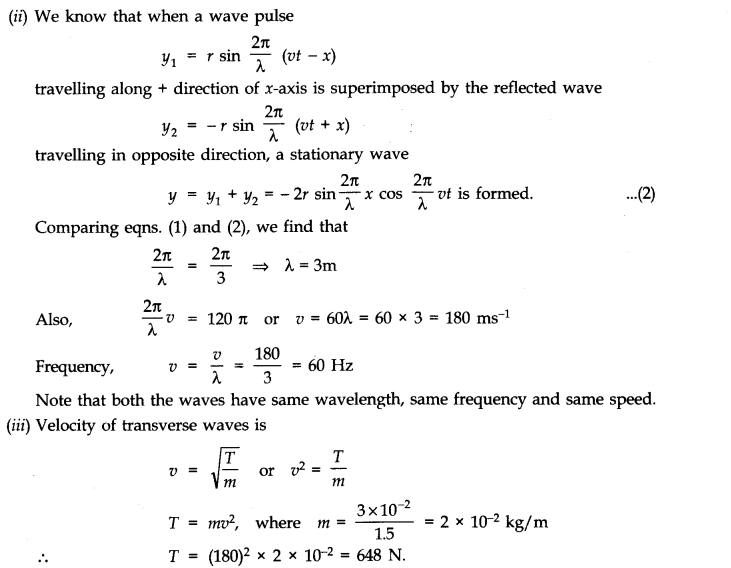 Question 15. 12. (i) For the wave on a string described in Question 11, do all the points on the string oscillate with the same (a) frequency, (b) phase, (c) amplitude? Explain your answers, (ii) What is the amplitude of a point 0.375 m away from one end?
Answer: (i) For the wave on the string described in questions we have seen that l = 1.5 m and λ = 3 m. So, it is clear that λ = λ /2 and for a string clamped at both ends, it is possible only when both ends behave as nodes and there is only one antinode in between i.e., whole string is vibrating in one segment only.
(a) Yes, all the sring particles, except nodes, vibrate with the same frequency v = 60 Hz.
(b) As all string particles lie in one segment, all of them are in same phase.
(c) Amplitude varies from particle to particle. At antinode, amplitude = 2A = 0.06 m. It gradually falls on going towards nodes and at nodes, and at nodes, it is zero.
(ii) Amplitude at a point x = 0.375 m will be obtained by putting cos (120 πt) as + 1 in the wave equation.

Question 15. 13. Given below are some functions of x and t to represent the displacement (transverse or longitudinal) of an elastic wave. State which of these represent (i) a travelling wave, (ii) a stationary wave or (iii) none at all 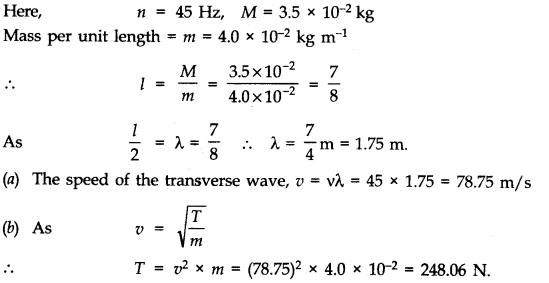 Question 15. 15. A metre-long tube open at one end, with a movable piston at the other end, shows resonance with a fixed frequency source (a turning fork of frequency 340 Hz) when the tube length is 25.5 cm or 79.3 cm. Estimate the speed of sound in air at the temperature of the experiment. The edge effect may be neglected.
Answer: 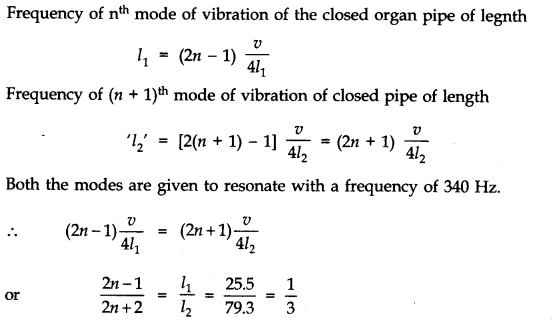 Question 15. 19. Explain why (or how):
(a) in a sound wave, a displacement node is a pressure antinode and vice versa.
(b) bats can ascertain distances, directions, nature and sizes of the obstacles without any “eyes”.
(c) a violin note and sitar note may have the same frequency, yet we can distinguish between the two notes.
(d) solids can support both longitudinal and transverse waves, but only longitudinal waves can propagate in gases, and
(e) the shape of a pulse gets distorted during propagation in a dispersive medium.
Answer:  (a) In a sound wave, a decrease in displacement i.e., displacement node causes an increase in the pressure there i.e., a pressure antinode is formed. Also, an increase in displacement is due to the decrease in pressure.
(b) Bats emit ultrasonic waves of high frequency from their mouths. These waves after being reflected back from the obstacles on their path are observed by the bats. These waves give them an idea of distance, direction, nature and size of the obstacles.
(c) The quality of a violin note is different from the quality of sitar. Therefore, they emit different harmonics which can be observed by human ear and used to differentiate between the two notes.
(d) This is due to the fact that gases have only the bulk modulus of elasticity whereas solids have both, the shear modulus as well as the bulk modulus of elasticity.
(e) A pulse of sound consists of a combination of waves of different wavelength. In a dispersive medium, these waves travel with different velocities giving rise to the distortion in the wave.

Question 15. 21. A train, standing in a station-yard, blows a whistle of frequency 400 Hz in still air. The wind starts blowing in the direction from the yard to the station with a speed of 10 ms-1. What are the frequency, wavelength, and speed of sound for an observer standing on the station’s platform? Is the situation exactly identical to the case when the air is still and the observer runs towards the yard at a speed of 10 ms-1? The speed of sound in still air can be taken as 340 ms-1?
Answer: 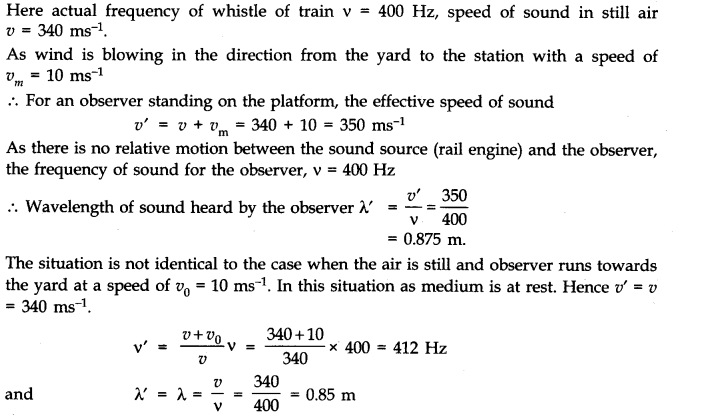 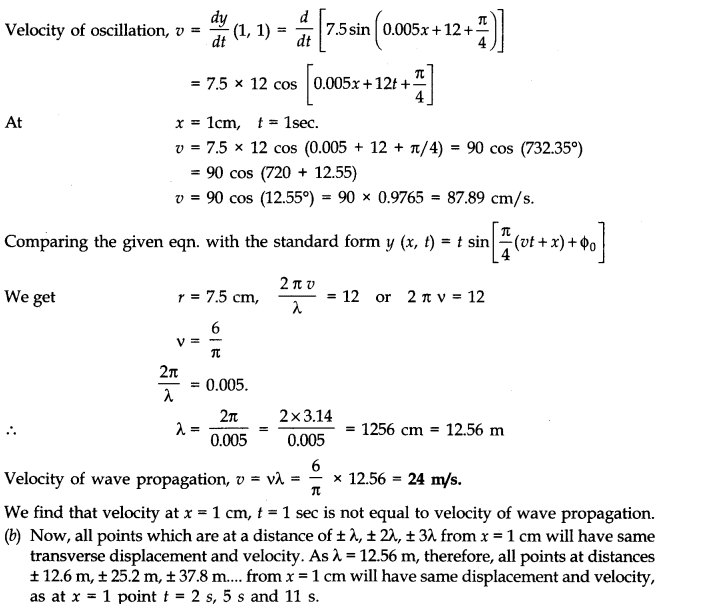 Question 15. 23. A narrow sound pulse (for example, a short pip by a whistle) is sent across a medium, (a) Does the pulse have a definite (i) frequency, (ii) wavelength, (iii) speed of propagation? (b) If the pulse rate is 1 after every 20 s, (that is the whistle is blown for a split of second after every 20 s), is the frequency of the note produced by the whistle equal to 1/20 or 0.05 Hz?
Answer:  (a) In a non dispersive medium, the wave propagates with definite speed but its wavelength of frequency is not definite.
(b) No, the frequency of the note is not 1/20 or 0.50 Hz. 0.005 Hz is only the frequency ‘ of repetition of the pip of the whistle.

Question 15. 24. One end of a long string of linear mass density 8.0 x 10-3 kg m-1 is connected to an electrically driven tuning fork of frequency 256 Hz. The other end passes over a pulley and is tied to a pan containing a mass of 90 kg. The pulley end absorbs all the incoming energy so that reflected waves at this end have negligible amplitude. At t = 0, the left end (fork end) of the string x = 0 has zero transverse displacement (y = 0) and is moving along positive y-direction. The amplitude of the wave is 5.0 cm. Write down the transverse displacement y as function of x and t that describes the wave on the string.
Answer: Here, mass per unit length, g = linear mass density = 8 x 10-3 kg m-1;
Tension in the string, T = 90 kg = 90 x 9.8 N= 882 N; 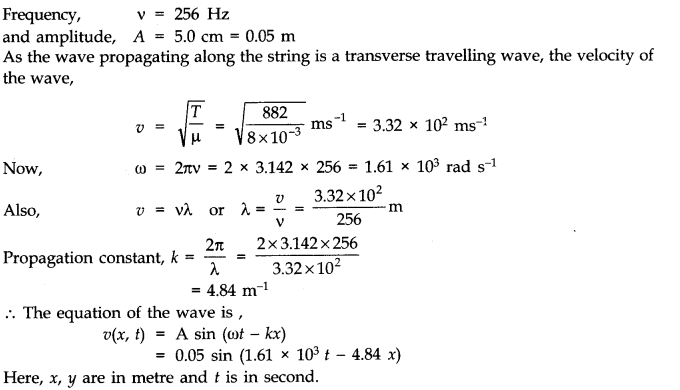 Question 15. 25. A SONAR system fixed in a submarine operates at a frequency 40.0 kHz. An enemy submarine moves towards the SONAR with a speed of 360 km h-1. What is the frequency of sound reflected by the submarine? Take the speed of sound in water to be 1450 ms-1.
Answer:

Question 15. 26. Earthquakes generate sound waves inside the earth. Unlike a gas, the earth can experience both transverse (S) and longitudinal (P) sound waves. Typically the speed of S wave is about 4.0 km s-1 . A seismograph records P and S waves from an earthquake. The first P wave arrives 4 min before the first S wave. Assuming the waves travel in straight line, at what distance does the earthquake occur?
Answer: Here speed of S wave, υs = 4.0 km s-1 and speed of P wave, υp = 8.0 km s-1. Time gap between P and S waves reaching the resimograph, t = 40 min = 240 s.
Let distance of earthquake centre = sKm

Question 15. 27. A bat is flitting about in a cave, navigating via ultrasonic beeps. Assume that the sound emission frequency of the bat is 40 kHz. During one fast swoop directly toward a flat wall surface, the bat is moving at 0.03 times the speed of sound in air. What frequency does the bat hear reflected off the wall ?
Answer:  Here, the frequency of sound emitted by the bat, υ = 40 kHz. Velocity of bat, υs = 0.03 υ, where υ is velocity of sound. Apparent frequency of sound striking the wall