Skip to content
Home » Tech News » What is the Difference Between Ansible and Terraform?

Background of Terraform and Ansible

In Terraform, the final state is defined directly. The only drawback is that as Terraform is declarative in nature, the final result is accessible only to providers. Therefore, if users need to access the end state, then they must install and configure the deployed applications using the scripts and tools.

Along with initial deployment, Terraform also performs orchestration. This functionality is possible because of its:

Terraform code is efficient enough in spinning up the environments; hence, it quickly describes the resources that make up a stack.

When we make a comparison as Ansible vs Terraform, we get to know that Terraform works great in automating provisioning processes and also aids in the process of moving to cloud management resources.

The main difference between Terraform and Ansible is that Terraform is declarative in defining the process by which results can be achieved. While using Terraform, code always represents the present status of the infrastructure.

Terraform is quick to build from scratch as compared to other tools. It can be used to build anything, be it creating a cloud network, scaling objects, or providing pretty much every cloud feature.

Ansible has been run by Red Hat Inc. since 2012. It is a configuration management tool with a core open-source project. However, a few commercial extensions, like Ansible Tower, are also available. Ansible’s architecture is agentless and serverless, and it supports modules for managing Windows and UNIX-like hosts. It depends on SSH/PowerShell sessions for conducting the configuration tasks.

Ansible executes an imperious DevOps paradigm. As a result, its users are solely considered responsible for executing all the ad-hoc commands and steps that go into achieving the desired goal. The essential tasks here include:

Because of its imperative nature, Ansible is perfectly suitable for traditional configuration management. It is used for various purposes, such as automation and potential migration. However, Ansible is inefficient in orchestrating services and in scaling large environments of interconnected applications.

Ansible is a popular automation tool used for deploying codes and servers. Due to its configuration methodology, Ansible can help track the changes made and bring servers and services within the desired state.

Ansible is a light-weight tool preferable for quick deployment abilities. Moreover, it is user-friendly to begin with. You can perform the complete management of your servers with just a little configuration.

When you make a comparison as Terraform vs Ansible, Ansible excels in the process of configuring systems as it follows the step-by-step process in achieving the end result.

Ansible consists of numerous popular sub-modules, such as AWS and Azure, to be able to support integrations. This configuration management tool is perceived as a hybrid tool as it can execute a procedural-style configuration.

Automating the provisioning of any infrastructure is the first step in the automation of an entire operational lifecycle of an application and its deployment. In the cloud, the software runs from a VM, Docker container, or a bare metal server. Either Terraform, or Ansible is a good choice for provisioning such systems. Puppet is the older tool, so we’ll take a closer look at the newer DevOps programs for managing multiple servers.

Terraform and Ansible approach the process of provisioning differently, as described below, but there is some overlap.

There are certain behaviors not represented in Terraform’s existing declarative model. This setup adds a significant amount of uncertainty and complexity when using Terraform in the following ways:

The Terraform model is unable to model the actions of provisioners when it is part of a plan. It requires coordinating more details than what is necessary for normal Terraform usage to use provisioners successfully.

It requires additional measures such as granting direct network access to the user’s servers, installing essential external software, and issuing Terraform credentials for logging in.

After completing bootstrapping, Ansible allows separate teams to connect nodes to the storage. It can add them to a load balancer, or any security patched or other operational tasks. This setup makes Ansible the perfect connecting tool for any process pipeline.

It aids in automatically taking bare infrastructure right through to daily management. Provisioning with Ansible, allows users to use a universal, human-readable automation language seamlessly across configuration management, application deployment, and orchestration. 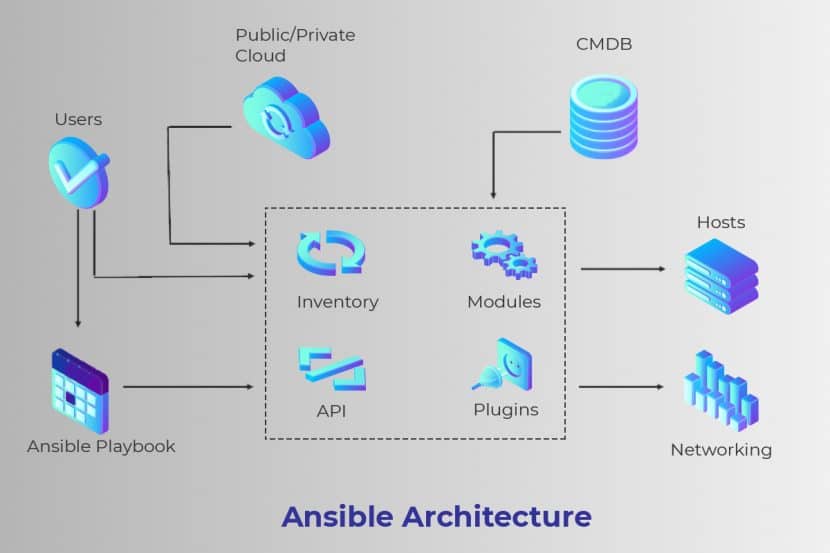 Differences between Ansible and Terraform for AWS

Terraform is an excellent way for users who do not have a lot of virtualization experience to manage AWS. Even though it can feel quite complicated at first, Terraform has drastically reduced the hurdles standing in the way of increasing adoption.

There are several notable advantages when using Terraform with AWS.

Ansible has offered significant support for AWS for a long time. This support allows interpretation of even the most complicated of AWS environments using Ansible playbooks. Once described, users can deploy them multiple times as required, with the ability to scale out to hundreds and even thousands of instances across various regions.

Here are the advantages when using Ansible with AWS.

Comparison of Ansible and Terraform

Related:  What is Spinnaker?

Terraform was designed with immutability in mind. It is a provisioning tool that deals with immutable infrastructures in a native way. This makes it a good choice when you reject configuration management tools. The tool is more intuitive for infrastructure orchestration because it was created for it and all of its updates are dedicated to that.

Ansible is optimized for configuration management and although it can perform orchestration tasks it is better to use the best (and fastest) tool for the given task.

Terraform and Ansible have their fair share of similarities, along with some dissimilarities. Both tools help in deploying code and infrastructure in repeatable environments that possess complex requirements. However, if you take a practical approach, it is advisable to use Terraform for the purpose of orchestration and Ansible for configuration management.

As day by day data centers are increasing in their complexity, each of these tools finds its space in the development process. Nevertheless, you should be aware of the limitations of both before employing them in your workforce.