Having multiple branches is extremely convenient to keep new changes separated from each other, and to make sure you don’t accidentally push unapproved or broken changes to production. Once the changes have been approved, we want to get these changes in our production branch!

One way to get the changes from one branch to another is by performing a git merge! There are two types of merges Git can perform: a fast-forward, or a no-fast-forward

This may not make a lot of sense right now, so let’s look at the differences!

Perfect! We now have all the changes that were made on the dev branch available on the master branch. So, what’s the no-fast-forward all about?

No big deal, a perfect merge!  The master the branch now contains all the changes that we’ve made on the dev branch.

Although Git is good at deciding how to merge branches and add changes to files, it cannot always make this decision all by itself 🙂 This can happen when the two branches we’re trying to merge have changes on the same line in the same file, or if one branch deleted a file that another branch modified, and so on.

In that case, Git will ask you to help decide which of the two options we want to keep! Let’s say that on both branches, we edited the first line in the README.md. 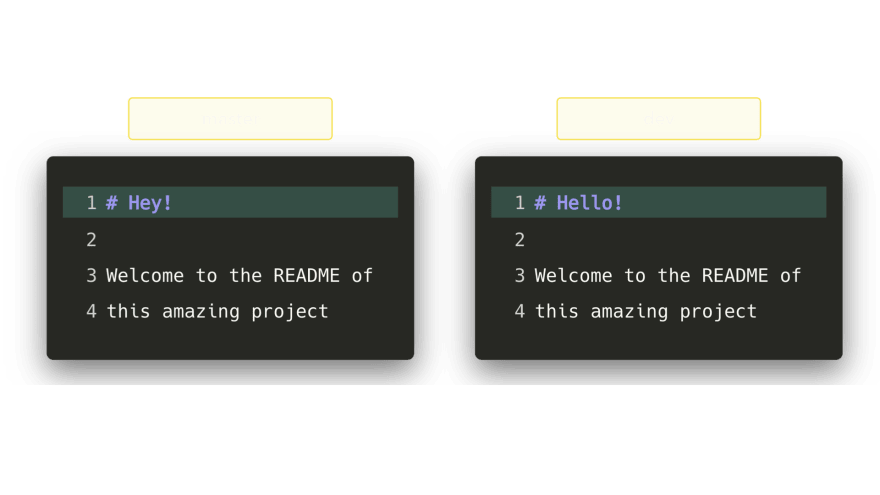 If we want to merge dev into master, this will end up in a merge conflict: would you like the title to be Hello! or Hey!?

When trying to merge the branches, Git will show you where the conflict happens. We can manually remove the changes we don’t want to keep, save the changes, add the changed file again, and commit the changes.

Yay! Although merge conflicts are often quite annoying, it makes total sense: Git shouldn’t just assume which change we want to keep.

A git rebase copies the commits from the current branch, and puts these copied commits on top of the specified branch.

Perfect, we now have all the changes that were made on the master branch available on the dev branch!

A big difference compared to merging, is that Git won’t try to find out which files to keep and not keep. The branch that we’re rebasing always has the latest changes that we want to keep! You won’t run into any merging conflicts this way, and keeps a nice linear Git history.

This example shows rebasing on the master branch. In bigger projects, however, you usually don’t want to do that. A git rebase changes the history of the project as new hashes are created for the copied commits!

Rebasing is great whenever you’re working on a feature branch, and the master branch has been updated. You can get all the updates on your branch, which would prevent future merging conflicts! 😄

There are 6 actions we can perform on the commits we’re rebasing:

Awesome! This way, we can have full control over our commits. If we want to remove a commit, we can just drop it.

Or if we want to squash multiple commits together to get a cleaner history, no problem!

Interactive rebasing gives you a lot of control over the commits you’re trying to rebase, even on the current active branch!

It can happen that we committed changes that we didn’t want later on. Maybe it’s a WIP commit, or maybe a commit that introduced bugs! 🐛 In that case, we can perform a git reset.

A git reset gets rid of all the current staged files and gives us control over where HEAD should point to.

A soft reset moves HEAD to the specified commit (or the index of the commit compared to HEAD), without getting rid of the changes that were introduced on the commits afterward!

When typing git status, you’ll see that we still have access to all the changes that were made on the previous commits. This is great, as this means that we can fix the contents of these files and commit them again later on!

Sometimes, we don’t want to keep the changes that were introduced by certain commits. Unlike a soft reset, we shouldn’t need to have access to them anymore. Git should simply reset its state back to where it was on the specified commit: this even includes the changes in your working directory and staged files!

Git has discarded the changes that were introduced on 9e78i and 035cc, and reset its state to where it was on commit ec5be.

Another way of undoing changes is by performing a git revert. By reverting a certain commit, we create a new commit that contains the reverted changes!

Let’s say that ec5be added an index.js file. Later on, we actually realize we didn’t want this change introduced by this commit anymore! Let’s revert the ec5be commit.

Perfect! Commit 9e78i reverted the changes that were introduced by the ec5be commit. Performing a git revert is very useful in order to undo a certain commit, without modifying the history of the branch.

Say that commit 76d12 on the dev branch added a change to the index.js file that we want in our master branch. We don’t want the entire we just care about this one single commit!

If we have a remote Git branch, for example, a branch on Github, it can happen that the remote branch has committed that the current branch doesn’t have! Maybe another branch got merged, your colleague pushed a quick fix, and so on.

We can get these changes locally, by performing a git fetch on the remote branch! It doesn’t affect your local branch in any way: a fetch simply downloads new data.

We can now see all the changes that have been made since we last pushed! We can decide what we want to do with the new data now that we have it locally.

Although a git fetch is very useful in order to get the remote information of a branch, we can also perform a git pull. A git pull is actually two commands in one: a git fetch, and a git merge. When we’re pulling changes from the origin, we’re first fetching all the data as we did with a git fetch, after which the latest changes are automatically merged into the local branch.

Awesome, we’re now perfectly in sync with the remote branch and have all the latest changes!

Everyone makes mistakes, and that’s totally okay! Sometimes it may feel like you’ve screwed up your git repo so badly that you just want to delete it entirely.

git reflog is a very useful command in order to show a log of all the actions that have been taken! This includes merges, resets, reverts: basically any alteration to your branch.

If you made a mistake, you can easily redo this by resetting HEAD based on the information that reflog gives us!

Say that we actually didn’t want to merge the origin branch. When we execute the git reflog command, we see that the state of the repo before the merge is at HEAD@{1}. Let’s perform a git reset to point HEAD back to where it was on HEAD@{1}!

We can see that the latest action has been pushed to the reflog! Hope now it’s easy to understand Git commands 😎