Topics and Subtopics in NCERT Solutions for Class 12 Physics Chapter 5 Magnetism and Matter:

Question 1.
Answer the following questions regarding earth’s magnetism :
(a) A vector needs three quantities for its specification. Name the three independent quantities conventionally used to specify the earth’s magnetic field.
(b) The angle of dip at a location in southern India is about 18°. Would you expect a greater or smaller dip angle in Britain ?       (C.B.S.E. 1995)
(c) If you made a map of magnetic field lines at Melbourne in Australia, would the lines seem to go into the ground or come out of the ground ?
(d) In which direction would a compass free to move in the vertical plane point to, if located right on the geomagnetic north or south pole ? (C.B.S.E. 1995)
(e) The earth’s field, it is claimed, roughly approximates the field due to a dipole of
magnetic moment 8 x 1022 JT_1 located at its center. Check the order of magnitude of this number in some way.
(f) Geologists claim that besides the main magnetic N­S poles, there are several local poles on the earth’s surface oriented in different directions. How is such a thing possible at all ?
Answer:
(a) 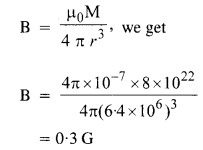 Question 2.
Answer the following questions :
(a) The earth’s magnetic field varies from point to point in space. Does it also change with time ? If so, on what time scale does it change appreciably ?
(b) The earth’s core is known to contain iron. Yet geologists do not regard this as a source of the earth’s magnetism. Why ?
(c) The charged currents in the outer conducting regions of the earth’s core are thought to be responsible for earth’s magnetism. What might be the ‘battery’ (i.e. the source of energy) to sustain these currents ?
(d) The earth may have even reversed the direction of its field several times during its history of 4 to 5 billion years. How can geologists know about the earth’s field in such distant past ?
(e) The earth’s field departs from its dipole shape substantially at large distances (greater than about 30,000 km). What agencies may be responsible for this distortion ?(f) Interstellar space has an extremely weak magnetic field of the order of 1012 T. Can such a weak field be of any significant consequence ? Explain.
Answer:
(a) Although appreciable change can take a few hundred years yet change with time is very much there.
(b) Molten iron has a temperature more than Curie temperature so it is not ferromagnetic in nature.
(c) Probably radioactivity (i.e. emission of a, P and y particles from the nuclei) present in the interior of earth is responsible for it.
(f) During solidification of some rocks, the magnetic field of earth gets weakly recorded in these rocks. Geomagnetic history of these rocks can be traced by making analysis of such rocks.
(e) Ionosphere of earth consists of charged ions. Motion of these ions causes a magnetic field which affects the magnetic field of earth at large distances from earth. The magnetic field due to ions depends upon extra terrestrial disturbances like solar wind.
(f) At very-very large distances like interstellar distances the small fields can significantly affect the charged particles like that of cosmic rays. For small distances, the deflections are not noticeable for small fields but at very large distances the deflections are significant.

Question 3.
A short bar magnet placed with its axis at 30° with a uniform external magnetic field of 0.25 T experiences a torque of magnitude equal to 4.5 X 10-2 J. What is the magnitude of magnetic moment of the magnet ?
Answer:
Using τ- MB sin θ, we get

Question 4.
A short bar magnet of magnetic moment m = 0.32 JT-1 is placed in a uniform magnetic field of 0.15 T. If the bar is free to rotate in the plane of the field, which orientation would correspond to its (a) stable, and (b) unstable equilibrium ? What is the potential energy of the magnet in each case ?
Answer: 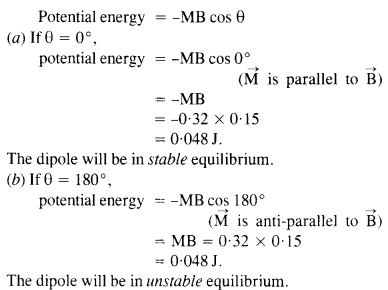 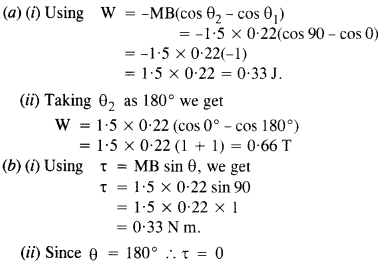 Question 9.
A circular coil of 16 turns and radius 10 cm carrying a current of 0.75 A rests with its plane normal to an external field of magnitude 5.0 x 10-2 T. The coil is free to turn about an axis in its plane perpendicular to the field direction. When the coil is turned slightly and released, it oscillates about its stable equilibrium with a frequency of 2.0 s_1. What is the moment of inertia of the coil about its axis of rotation ?
Answer:

Question 11.
At a certain location in Africa, a compass points 12° west of the geographic north. The north tip of the magnetic needle of a dip circle placed in the plane of magnetic meridian points 60° above the horizontal. The horizontal component of the earth’s field is measured to be 0.16 G. Specify the direction and magnitude of the earth’s field at the location.
Answer:
Using BH = B cos δ, we get

Direction of B is 12° west of geographic meridian making upward angle of 60° with horizontal.

Question 12.
A short bar magnet has a magnetic moment of 0.48 JT-1. Give the direction and magnitude of the magnetic field produced by the magnet at a distance of 10 cm from the center of the magnet on (a) the axis, (b) the equatorial lines (normal bisector) of the magnet.
Answer:
On axial line 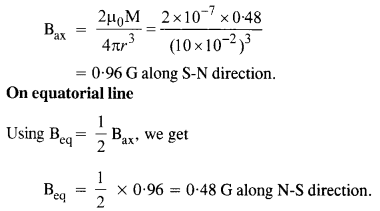 Question 14.
If the bar magnet in Exercise 5.13 is turned around by 180°, where will the new null-points be located ?
Answer:
When magnet is turned around 180°, its south pole lies in the geographical south direction. Hence null point will lie on the equatorial line at a distance x from die center of the magnet. 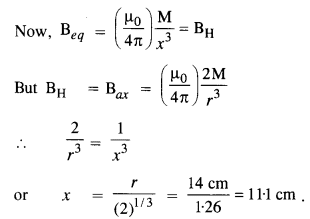 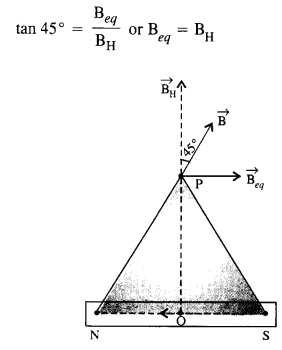 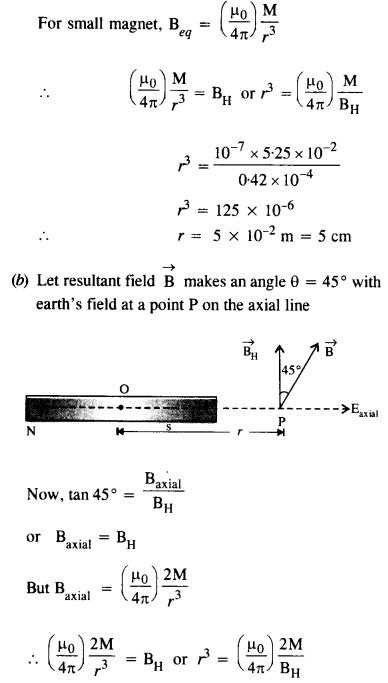 Question 17.
Answer the following questions :
(a) Explain qualitatively on the basis of domain picture the irreversibility in the magnetisation curve of a ferromagnet.
(b) The hysteresis loop of a soft iron piece has a much smaller area than that of a carbon steel piece. If the material is to go through repeated cycles of magnetization, which piece will dissipate greater heat energy ?
(c) ‘A system displaying a hysteresis loop such as a ferromagnet is a device for storing memory.’ Explain the meaning of this statement.
(d) What kind of ferromagnetic material is used for coating magnetic tapes in a cassette player, or for budding ‘memory stores’ in a modern computer ?
(e) A certain region of space is to be shielded from magnetic fields. Suggest a method.
Answer:
(a) It can be observed from the given curve that magnetisation persists even when the external field is removed. This reflects the irreversibility of a ferromagnet.
(b) Heat dissipated per second is directly proportional to the area of the hysteresis loop so carbon steel piece will dissipate greater heat energy.
(c) Magnetisation of a ferromagnet depends upon the applied field as number of cycles of magnetisation given to it. Thus the value of magnetisation can indicate the number of cycles of magnetisation a sample has undergone or in other words the memory with respect to the cycles stands stored in the sample.
(d) Ceramics are used for this purpose. Ferrites which are specially treated barium iron oxides are commonly used.
(e) The space to be shielded is enclosed by soft iron rings. The magnetic field lines remain confined in the ferromagnetic material of the rings and the enclosed space will be free from magnetic effect.
Note. Magnetic shielding is not as effective as electrostatic shielding is. 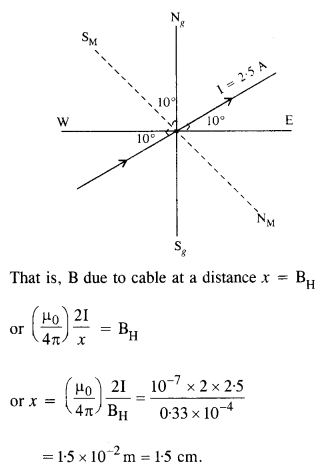 Question 19.
A telephone cable at a place has four long straight horizontal wires carrying a current of 1.0 A in the same direction east to west. The earth’s magnetic field at the place is 0.39 G, and the angle of dip is 35°. The magnetic declination is nearly zero. What are the resultant magnetic fields at points 4.0 cm below the cable ?
Answer: 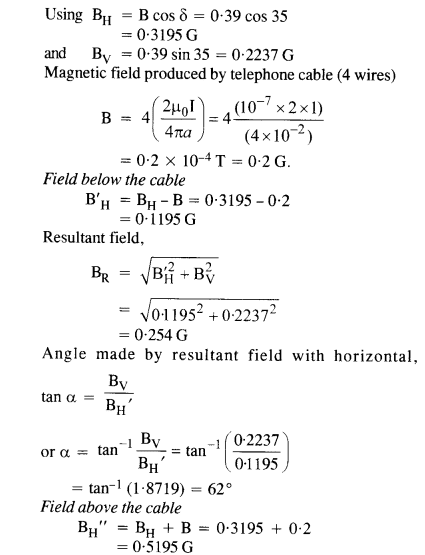 Question 20.
A compass needle free to turn in a horizontal plane is placed at the center of circular coil of 30 turns and radius 12 cm. The coil is in a vertical plane making an angle of 45° with the magnetic meridian. When the current in the coil is 0.35 A, the needle points west to east.
(a) Determine the horizontal component of the earth’s magnetic field at the location.
(b) The current in the coil is reversed, and the coil is rotated about its vertical axis by an angle of 90° in the anticlockwise sense looking from above. Predict the direction of the needle. Take the magnetic declination at the place to be zero.
Answer: 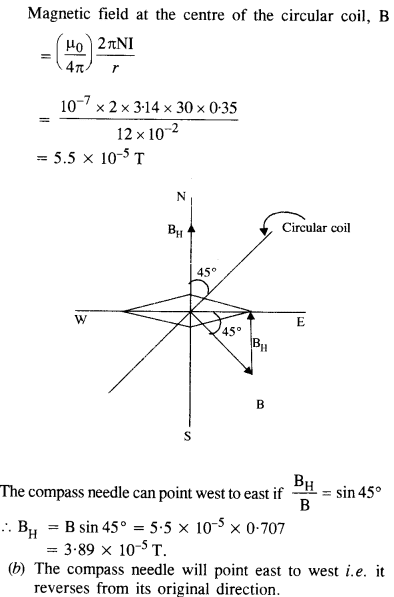 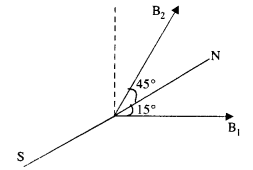 Question 22.
A monoenergetic (18 keV) electron beam intially in the horizontal direction is subjected to a horizontal magnetic field of 0.40 G normal to the initial direction. Estimate the up
or down deflection of the beam over a distance of 30 cm (me = 9.11 x 10-19 Q.
[Note. Data in this exercise are so chosen that the answer will give you an idea of the effect of earth’s magnetic field on the motion of the electron beam from the electron gun to the screen in a TV set.]
Answer: 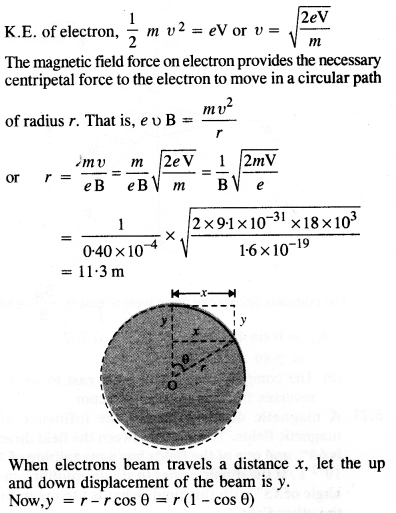 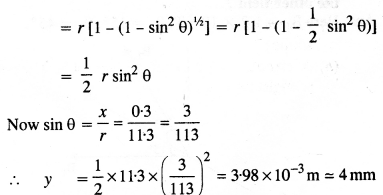 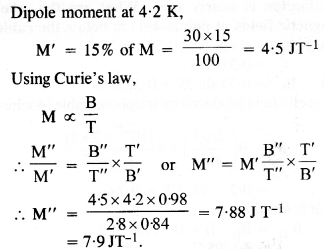 Question 24.
A Rowland ring of mean radius 15 cm has 3500 turns of wire wound on a ferromagnetic core of relative permeability 800. What is the magnetic field B in the core for a magnetising current of 1.2 A?
Answer:

Question 25.
The magnetic moment vectors μs and μl; associated with the intrinsic spin angular momentum S and orbital angular momentum Z, respectively, of an electron are predicted by quantum theory (and verified experimentally to a high accuracy) to be given by :
μs= -(e/m)S,
μl= -(e/2m)l
Which of these relations is in accordance with the result expected classically ? Outline the derivation of the classical result.
Answer: 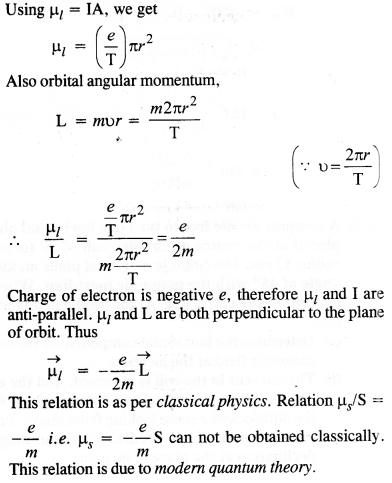