Question 9.
For a CE-transistor amplifier, the audio signal voltage across the collector resistance of 2 kQ is 2 V. Suppose the current amplification factor of the transistor is 100, find the input signal voltage and base current, if the base resistance is 1 kΩ.
Answer: 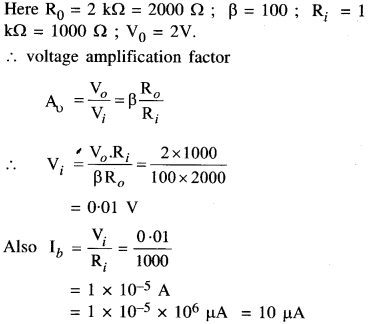 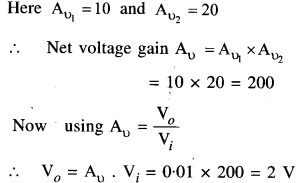 Question 11.
A p-n photodiode is fabricated from a semiconductor with band gap of 2.8 eV. Can it detect a wavelength of 6000 nm ?
Answer: 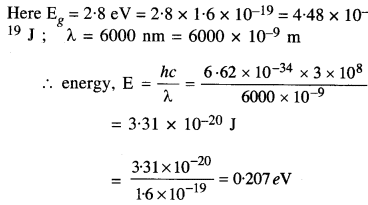 Since the energy of the light photon is less than the band gap energy of p-n diode, it can not be detected. 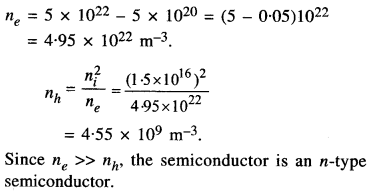 Question 13.
In an intrinsic semiconductor the energy gap Eg is 1.2 eV. Its hole mobility is much smaller than electron mobility and independent of temperature. What is the ratio between conductivity at 600 K and that at 300 K ? Assume that the temperature dependence of intrinsic carrier concentration ni is given by 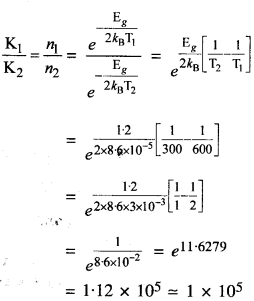 Thus, conductivity of a semiconductor increases with rise in temperature.

Question 14.
In a P-n junction diode, the current I can be expressed as

where I is reverse saturation current. V is the voltage across the diode and is positive for forward bias and negative for reverse bias, and I is the current through the diode, KB is the Boltzmann constant (8.6 x 10-5 eV/K) and T is the absolute temperature. If for a given diode I = 5 x 10-12 A and T = 300 K, then
(a) What will be the forward current at forward voltage of 0.6 V ?
(b) What will be the increase in current if voltage across diode is increased to 0.7 V ?
(c) What is the dynamic resistance ?
(d) What will be the current if reverse bias voltage changes from 1 V to 2 V ?
Answer:
Statement of the given question is incorrect. The relation should be

Question 15.
You are given the two circuits as shown in Figure. Show that circuit (a) acts as OR gate while the circuit (b) acts as AND gate. 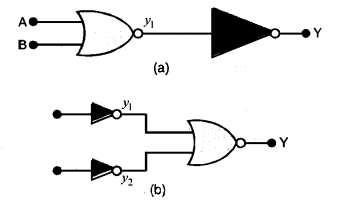 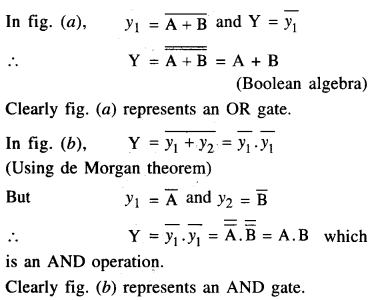 Question 16.
Write the truth table for a NAND gate connected as given in Fig. Hence identify the exact logic operation carried out by these circuits.

Since Y = A¯ in this case, the circuit is actually a NOT gate with the truth table

Question 17.
You are given two circuits as shown in Fig., which consist of NAND gates. Identify the logic operation carried out by the two circuits. 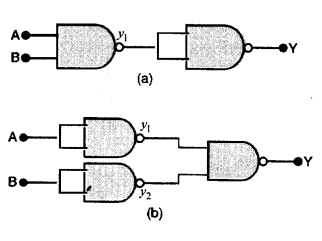 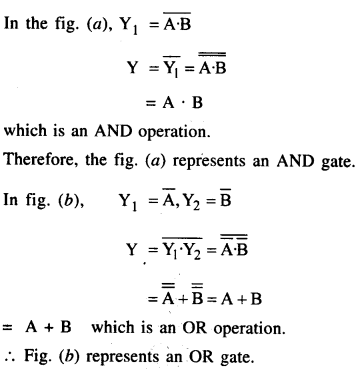 Question 18.
Write the truth table for circuit given in the Fig. below consisting of NOR gates and identify the logic operation (OR, AND, NOT) which this circuit is performing.

Answer:
Let y1 be the output which appears at the first operation of NOR gate. 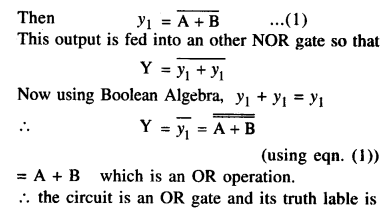 Question 19.
Write the truth table for the circuits given in the Fig., consisting of NOR gates only. Identify the logic operations (OR, AND, NOT) performed by the two circuits 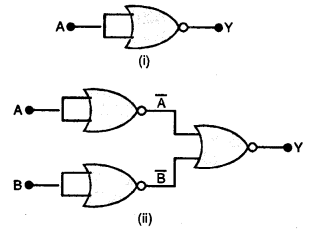 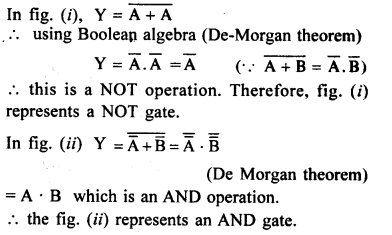