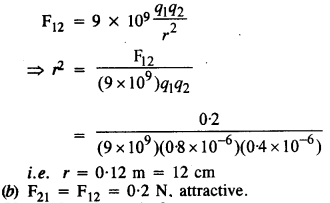 Question 3.
Check that the ratio ke2/G memp. is dimensionless. Look up a Table of Physical Constants and determine the value of this ratio. What does the ratio signify ?
Answer:

Thus, the given ratio is a number and is dimensionless. This ratio signifies that electrostatic force between electron and proton is very-very large as compared to the gravitational force between them.

Question 4.
(a) Explain the meaning of the statement ‘electric charge of a body is quantised.’
(b) Why can one ignore quantisation of electric charge when dealing with macroscopic i.e., large scale charges ?
Answer:
(a) Total charge on a body is equal to integral multiple of charge on an electron (e).
i.e. q = ± ne, where n = 0, 1, 2, 3, ….
(b) At macroscopic level, the quantisation of charge has no practical importance because the charge at macroscopic level is very large as compared to elementary charge i.e. 1.6 x 10_19C. For example, a small charge of 1 μC  has about 1013 electronic charges. In such cases the charge may be treated as continuous and not quantised. 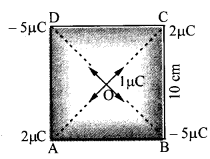 Question 8.
Two point charges qA = 3μC and qB = -3 μC are located 20 cm apart in vacuum.
(a) What is the electric field at the midpoint O of the line AB joining the two charges ?
(b) If a negative test charge of magnitude 1.5 x 10-9 C is placed at this point, what is the force experienced by the test charge ?         (C.B.S.E. 2003)
Answer:
(a) Electric field at the mid point of the separation between two equal and opposite charges is given by

Question 11.
A polythene piece rubbed with wool is found to have a negative charge of 3.2 x 10-4 C.
(a) (Estimate the number of electrons transferred (from which to which ?)
(b) Is there a transfer of mass from wool to polythene?
Answer:
(a) Using q = ne, we get

Question 12.
(a) Two insulated charged copper spheres A and B have their centers separated by a distance of 50 cm. What is the mutual force of electrostatic repulsion if the charge on each is 6.5 x 10–7 C ? The radii of A and B are negligible compared to the distance of separation.
(b) What is the force of repulsion if each sphere is charged double the above amount, and the distance between them is halved ?
Answer: 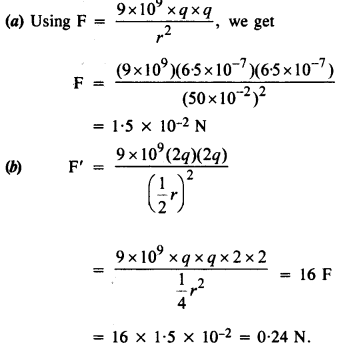 When third sphere, how having charge 3.25 X 10-7 C is brought in contact with sphere B, the charge left on sphere B is given by,

Question 14.
Figure shows tracks of three charged particles in a uniform electrostatic field. Give the signs of the three charges. Which particle has the highest charge to mass ratio ?

Answer:
Unlike charges attract each other, therefore particle 1 and 2 are negatively charged whereas particle 3 has positive charge. Particle 3 gets maximum deflection so it has highest charge (e) to mass (m) ratio because deflection, y α e/m 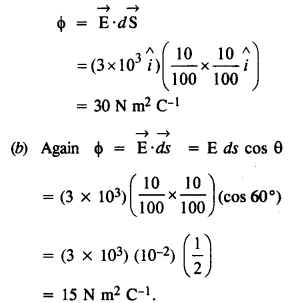 Question 18.
A point charge + 10 μC is a distance 5 cm directly above the center of a square of side 10 cm, as shown in the given figure. What is the magnitude of the electric flux through the square ? [Hint. Think of the square as one fact of a cube with edge 10 cm.]

Answer:
The charge can be assumed to be placed as shown in the figure. 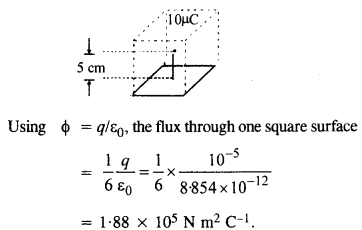 Question 19.
A point charge of 2.0 μC is at the center of a cubic Gaussian surface 9.0 cm on edge. What is the net electric flux through the surface ?
Answer:

Question 21.
a conducting sphere of radius 10 cm has an unknown charge. If the electric field 20 cm from the center of the sphere is 1.5 x 103 N/C and points radially inward, what is the net charge on the sphere ?
Answer: 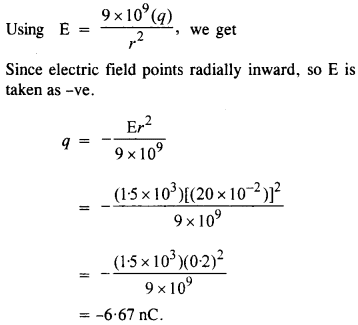 Question 22.
A uniformly charged conducting sphere of 2.4 m diameter has a surface charge density of 80.4 μC /m2.
(a) Find the charge on the sphere.
(b) What is the total electric flux leaving the surface of the sphere ? (B.S.E. 2009 C)
Answer:
(a) Charge on the sphere is given by 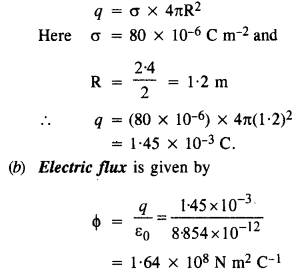 Question 23.
An infinite line charge produces a field of 9 X 104 N/C at a distance of 2 cm. Calculate the linear charge density
Answer: 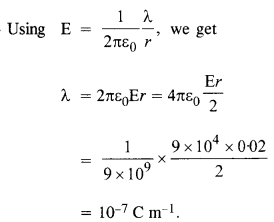 Question 24.
Two large, thin metal plates are parallel and close to each other. On their inner faces, the plates have surface charge densities of opposite signs and of magnitude
17.0 x 10-22 C/m2. What is E : 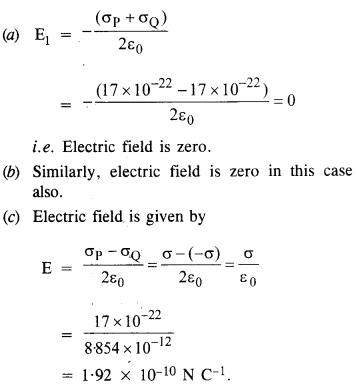 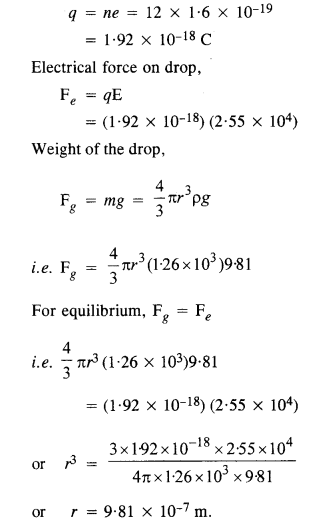 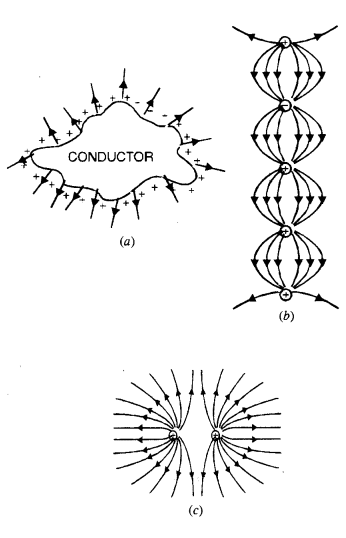 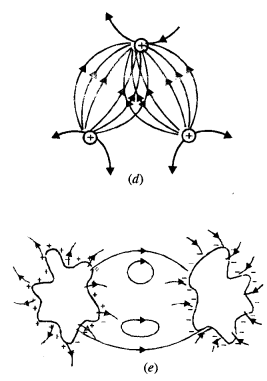 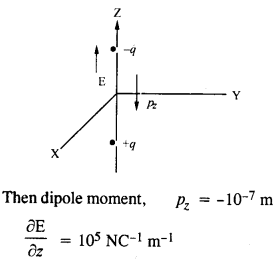 Question 28.
(a) A conductor A with a cavity as shown in figure (a) is given a charge Q. Show that the entire charge must appear on the outer surface of the conductor.
(b) Another conductor B with charge q is inserted into the cavity keeping B insulated from A. Show that the total charge on the outside surface of A is Q + q [Figure (b)].
(c) A sensitive instrument is to be shielded from the strong electrostatic fields in its environment. Suggest a possible way.

Question 29.
A hollow charged conductor has a tiny hole cut into its surface. Show that the electric field in the hole is (σ/2ε) n^, where n^ is the unit vector in the outward normal direction, and a is the surface charge density near the hole.
Answer:
Let the tiny hole of the conductor be considered as filled up. Field inside the conductor is zero, whereas outside it is given by

This field is infact due to
(1) field (E1) due to plugged hole and
(2) field E2 due to rest of the charged conductor. Inside the conductor, these fields are equal but opposite, whereas outside they are exactly same. i.e. 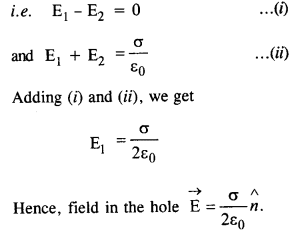 Related:  NCERT Solutions for Class 12 Economics Chapter 4 – The Theory of the Firm Under Perfect Competition 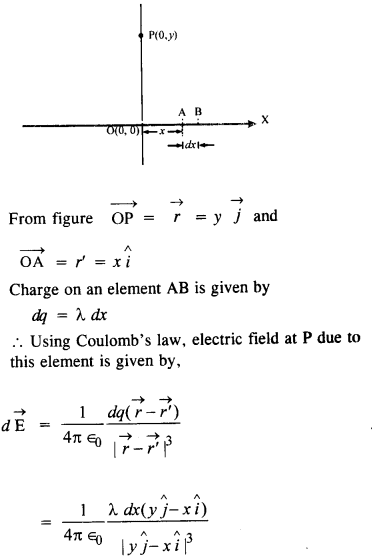 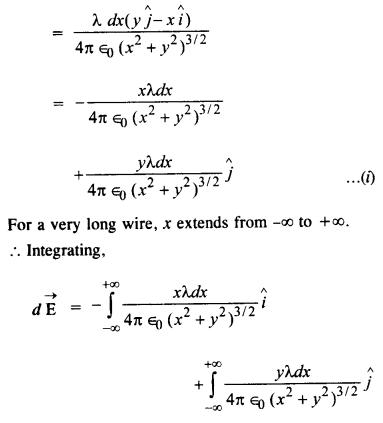 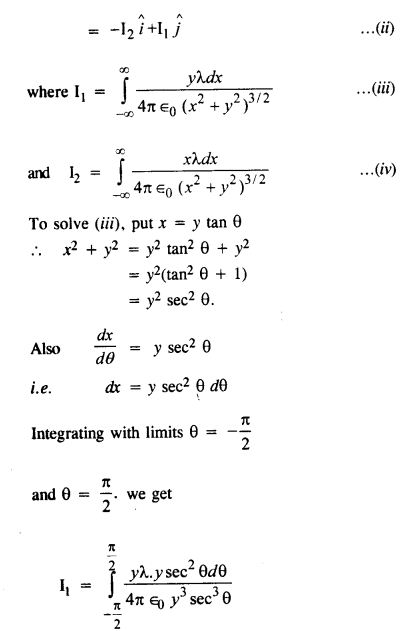 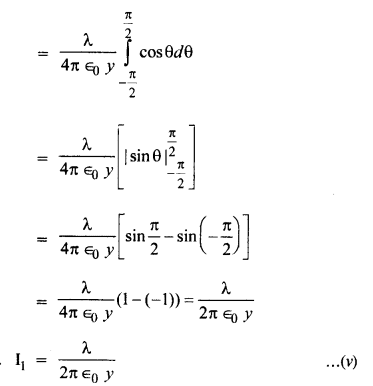 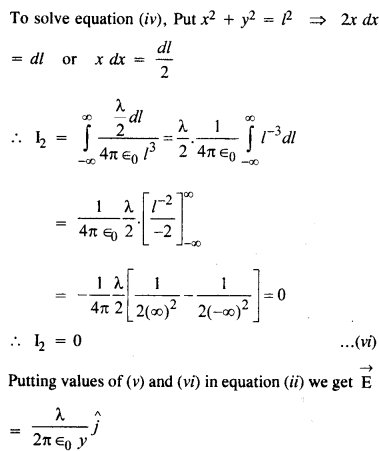 Question 31.
It is now believed that protons and neutrons (which constitute nuclei of ordinary matter) are themselves build out of more elementary units called quarks. A proton and a neutron consist of three quarks each. Two types of quarks, the so called ‘up’ quark (denoted by u) of charge + (2/3)e, and the ‘down’ quark (denoted by d) of charge
(-l/3)e, together with electrons build up ordinary matter. (Quarks of other types have also been found which give rise to different unusual varieties of matter.) Suggest a possible quark composition of a proton and neutron.)
Answer: 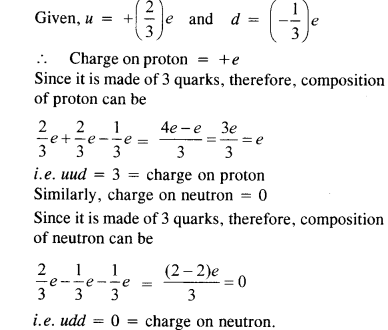 Question 33.
A particle of mass m and charge (-q) enters the region between the two charged plates initially moving along x-axis with speed σx, (like particle 1 in figure.) The length of plate is L and an uniform electric field E is maintained between the plates. Show that the vertical deflection of the particle at the far edge of the plate is qEL2/(2m υx2).
Compare this motion with motion of a projectile in gravitational field discussed in Section 4.10. of Class XI Textbook of Physics.
Answer:
Consider a uniform electric field E→ set up between two oppositely charged parallel plates (Figure). Let a positively charged particle having charge +q and  mass m enters the region of electric field E at O with velocity E along X-direction.
Step 1. 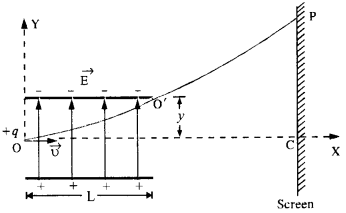 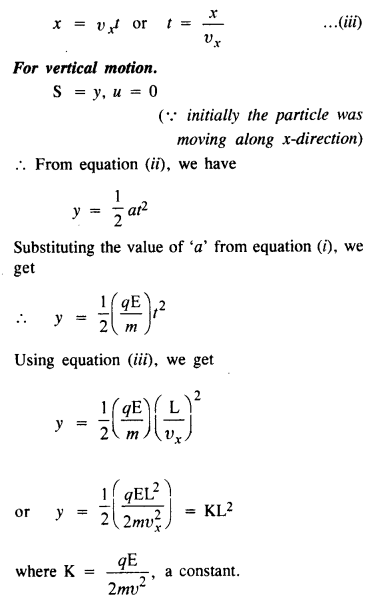 Equation (i) is the equation of a parabola.
Hence a charged particle moving in a uniform electric field follows a parabolic path. 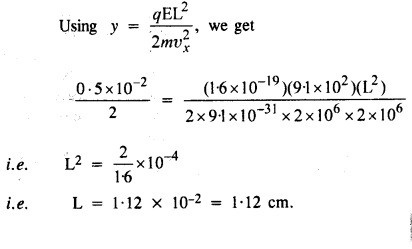