Question 1. Define environmental chemistry?
Answer: Environmental Chemistry is the branch of science which deals with the chemical changes in the environment. It includes our surroundings such as air, water, soil, forest etc.

Question 3. Carbon monoxide gas is more dangerous than carbon dioxide gas. Why?
Answer: Carbon monoxide combines with haemoglobin to form a very stable compound known as carboxyhaemoglobin when its concentration in blood reaches 3-4%, the oxygen carrying capacity of the blood is greatly reduced. This results into headache, nervousness and sometimes death of the person. On the other hand CO2 does not combine with haemoglobin and hence is less harmful than CO.

Question 5. Statues and monuments in India are affected by acid rain. How?
Answer: This is mainly due to the large number of industries and power plants in the nearby areas. Acid rain has vapours of sulphuric acid dissolved in it. When it comes in contact with various statues or monuments, the acid reacts chemically with calcium carbonate.
CaCO3 + H2SO4 ——–> CaSO4 + H2O + CO2

Question 6. What is smog? How is classical smog different from photochemical smog?
Answer: The word smog is a combination of smoke and fog. It is a type of air pollution that occurs in many cities throughout the world. Classical smog occurs in cool humid climate. It is also called as reducing smog.Whereas photochemical smog occurs in warm and dry sunny climate. It has high concentration of oxidising agents and therefore, it is also called as oxidising smog. 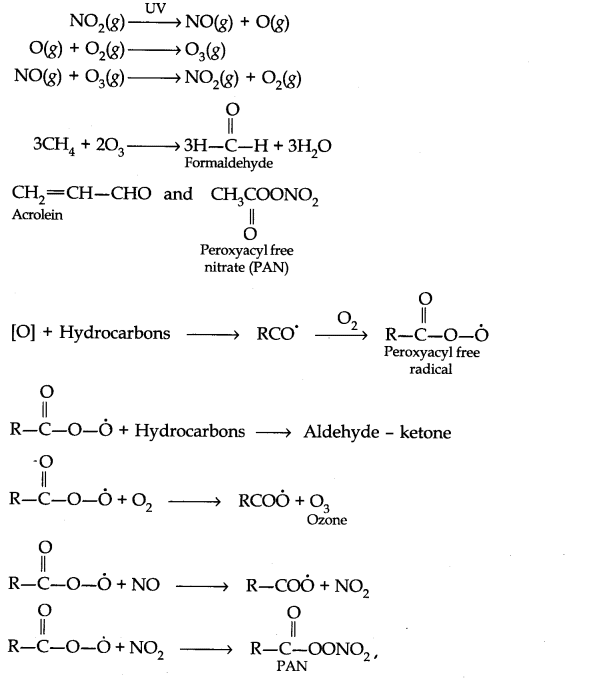 Question 10. What do you mean by ozone hole? What are its consequences?
Answer: Depletion of ozone layer creates some sort of holes in the blanket of ozone which
surround us, this is known as ozone hole.

Question 14. What do you mean by green chemistry? How will it help in decreasing environmental pollution ?
Answer: Green chemistry is a way of thinking and is about utilising the existing knowledge and principles of chemistry and other sciences to reduce the adverse effect of pollution.
For example:

Question 15. What would have happened if the greenhouse gases were totally missing in the earth’s atmosphere? Discuss.
Answer: The solar energy radiated back from the earth surface is absorbed by the green house gases. (CO2, CH4, O3, CFCs) are present near the earth’s surface.
They heat up the atmosphere near the earth’s surface and keep it warm. As a result of these, there is growth of vegetation which supports the life. In the absence of this effect, there will be no life of both plant and animal on the surface of the earth.

Question 16. A large number offish are suddenly found floating dead on a lake. There is no evidence of toxic dumping but you find an abundance of phytoplankton. Suggest a reason for the fish kill.
Answer: Excessive phytoplankton (organic pollutants such as leaves, grass trash etc.) present in water are biodegradable. Bacteria decomposes these organic matters in water. During this process when large number of bacteria decomposes these organic matters, they-consume the dissolved oxygen in water. When the level of dissolved oxygen falls below 6 ppm the fish cannot survive.

Question 17. How can domestic waste be used as manure?
Answer: Domestic waste consists of biodegradable waste which can be converted into manure by suitable method.

Question 18. For your agricultural field or garden you have developed a compost producing pit. Discuss the process in the light of bad odour, flies and recycling of wastes for a good produce.
Answer:  The compost producing pit should be kept covered so that flies cannot make entry into it and bad odour is minimized.
The waste materials which are non-biodegradable like glasses, plastic bags, polybags, must be handed over to the vendors who can send them to the recycling plants.

Question 2. What is the name of the compound formed when CO combines with blood?
Answer: Carboxyhaemoglobin.

Question 3. How are NO and NO2 formed in the atmosphere?
Answer: NO is formed due to the reaction between N2 and O2 during lightning or by the combustion of fossil fuels.NO is oxidised to form NO2.

Question 4. What is chlorosis?
Answer: Slowdown of process of formation of chlorophyll in plants with the presence of SO2 is called chlorosis.

Question 5. Which zone is known as ozonosphere?
Answer: Stratosphere.

Question 6. Which main gases is responsible for damage in ozone layer?
Answer: NO and CFCs

Question 7. What is the nature of classical smog?
Answer: Reducing.

Question 8. Name the acids which are responsible for acid rain?
Answer:  H2SO4, HNO3 and HCl.

Question 9. What is BOD?
Answer: The amount of oxygen consumed by micro organism in decomposing organic wastes of sewage water is called BOD (Biochemical Oxygen Demand).

Question 11. What is siltation?
Answer: Mixing of soil or rock particles in water is called siltation.

Question 12. What is the composition of London Smog?
Answer:  London Smog consists H2SO4 deposited on the particulates suspended in the atmosphere.

Question 13. List out the gases which are considered as major source of air pollution.
Answer: Carbon monoxide (CO), sulphur dioxide (SO2) and oxides of nitrogen (NO2).

Question 14. Why is acid rain considered as threat to Taj Mahal ?
Answer: Acids present in acid rain can react with marble (CaCO3) and damage the monument.

Question 15. Give one example of organic herbicide.
Answer: Triazines.

Question 16. What are pesticides ?
Answer:  Pesticides are the substances used to kill unwanted pests. For example, DDT.

Question 17. What is PAN stands for?
Answer: It is peroxyacetyl nitrate.

Question 18. Give the examples of insecticides.
Answer:  DDT, BHC.

Question 20. What is meant by polar vortex?
Answer: A tight whirlpool of wind formed in the stratosphere which surrounds Antarctica is called polar vortex.

Question 21. What should be the tolerable limit of F ions in drinking water?
Answer: 1 ppm or 1 mg dm-3.

Question 1. How did carbon monoxide act as a poison for human beings?
Answer: Carbon monoxide is poisonous because it combines with hemoglobin of R.B.C. to form carboxyhemoglobin as.

It inhibits the transport of oxygen to different parts of the body. Thus the body becomes oxygen-starved.

Question 2. What is ‘Acid Rain’? How is it harmful to the environment?
Answer:  Acid rain is the rain water mixed with small amount of sulphuric acid, nitric acid along with hydrochloric acid which are formed from the oxides of sulphur and nitrogen present in air as pollutants. It has a pH of 4-5.
Harmful effects of Acid Rain

Question 3. What is photochemical smog? What are its effects? How can it be controlled?
Answer:  This is a type of smog formed in warm, dry and sunny climate. They are formed when sunlight is absorbed by SO2, oxides of nitrogen and hydrocarbons.
They act as oxidising agents.
Effects of photochemical smog

Question 4. What do you mean by greenhouse effect? What is the role of CO2 in the greenhouse effect?
Answer:  It is the phenomenon in which earth’s atmosphere traps the heat from the sun and prevents it from escaping in outer space. Gases such as CO2, methane, ozone, CFCs are believed to be responsible for this effect.Heat from the sun after being absorbed by the earth is absorbed by CO2 and then radiated back to the earth. Thus making the environment of the earth warm.

Question 5. (a) Define eutrophication and pneumoconiosis.
(b) Write difference between photochemical and classical smog.
Answer:  (a) Eutrophication: When the growth of algaes increases in the surface of water, dissolved oxygen in water is reduced. This phenomenon is known as eutrophication. (Due to this growth of fish gets inhibited).
Pneumoconiosis: It is a disease which irritates lungs. It causes scarring or fibrosis of the lung.
(b)

Question 1. What is meant by PCBs?
Answer: PCBs are polychlorinated biphenyls. They are contaminants of water. They are used as fluids in transformers and capacitors.

Question 3. Give three examples in which green chemistry has been applied.
Answer: