An application writes items to an Amazon DynamoDB table. As the application scales to thousands of instances, calls to the DynamoDB API generate occasional
ThrottlingException errors. The application is coded in a language incompatible with the AWS SDK.
How should the error be handled?

An application deployed on AWS Elastic Beanstalk experiences increased error rates during deployments of new application versions, resulting in service degradation for users. The Development team believes that this is because of the reduction in capacity during the deployment steps. The team would like to change the deployment policy configuration of the environment to an option that maintains full capacity during deployment while using the existing instances.
Which deployment policy will meet these requirements while using the existing instances?

A Developer is working on an application that handles 10MB documents that contain highly-sensitive data. The application will use AWS KMS to perform client- side encryption.
What steps must be followed?

An AWS Lambda function must access an external site by using a regularly rotated user name and password. These items must be kept securely and cannot be stored in the function code.
What combination of AWS services can be used to accomplish this? (Choose two.)

A Developer is trying to deploy a serverless application using AWS CodeDeploy. The application was updated and needs to be redeployed.
What file does the Developer need to update to push that change through CodeDeploy?

A Developer wants to upload data to Amazon S3 and must encrypt the data in transit.
Which of the following solutions will accomplish this task? (Choose two.)

A company is running a Docker application on Amazon ECS. The application must scale based on user load in the last 15 seconds.
How should a Developer instrument the code so that the requirement can be met?

A company needs to ingest terabytes of data each hour from thousands of sources that are delivered almost continually throughout the day. The volume of messages generated varies over the course of the day. Messages must be delivered in real time for fraud detection and live operational dashboards.
Which approach will meet these requirements? 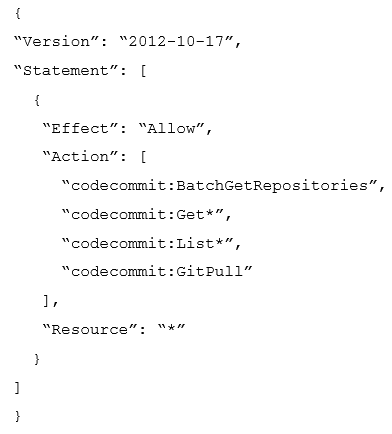 The Developer needs to create/delete branches.
Which specific IAM permissions need to be added, based on the principle of least privilege?