A nightly batch job loads 1 million new records into a DynamoDB table. The records are only needed for one hour, and the table needs to be empty by the next night’s batch job.
Which is the MOST efficient and cost-effective method to provide an empty table?

A company maintains a REST service using Amazon API Gateway and the API Gateway native API key validation. The company recently launched a new registration page, which allows users to sign up for the service. The registration page creates a new API key using CreateApiKey and sends the new key to the user. When the user attempts to call the API using this key, the user receives a 403 Forbidden error. Existing users are unaffected and can still call the API.
What code updates will grant these new users access to the API?

A Developer is writing a mobile application that allows users to view images from an S3 bucket. The users must be able to log in with their Amazon login, as well as FacebookÂ® and/or GoogleÂ® accounts.
How can the Developer provide this authentication functionality?

A Developer has created a Lambda function and is finding that the function is taking longer to complete than expected. After some debugging, the Developer has discovered that increasing compute capacity would improve performance.
How can the Developer increase the Lambda compute resources?

An e-commerce site allows returning users to log in to display customized web pages. The workflow is shown in the image below: 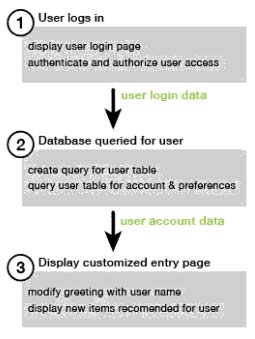 An application is running on EC2 instances. Amazon RDS is used for the database that stores user accounts and preferences. The website freezes or is slow to load while waiting for the login step to complete. The remaining components of the site are well-optimized.
Which of the following techniques will resolve this issue? (Select Two.)

A Developer is building a mobile application and needs any update to user profile data to be pushed to all devices accessing the specific identity. The Developer does not want to manage a back end to maintain the user profile data.
What is the MOST efficient way for the Developer to achieve these requirements using Amazon Cognito?

A company is migrating a single-server, on-premises web application to AWS. The company intends to use multiple servers behind an Elastic Load Balancer
(ELB) to balance the load, and will also store session data in memory on the web server. The company does not want to lose that session data if a server fails or goes offline, and it wants to minimize user’s downtime.
Where should the company move session data to MOST effectively reduce downtime and make users’ session data more fault tolerant?

A Developer created configuration specifications for an AWS Elastic Beanstalk application in a file named healthcheckurl.yaml in the .ebextensions/directory of their application source bundle. The file contains the following:

After the application launches, the health check is not being run on the correct path, event though it is valid.
What can be done to correct this configuration file?